Conservatives Furious that Kamala Harris’ Step-Daughter Has a Modeling Contract: ‘Melania Couldn’t Get a Cover!’

Elma Emhoff is Vice President Kamala Harris’s stepdaughter. Before we go any further, it might be best to first note that this is quite removed from anything to do with Kamala Harris. Emhoff is twenty-one and is certainly not working in the White House as an adviser.

No, Emhoff was signed a modeling contract with IMG, a powerful agency that represents models in the fashion world (and athletes in the sports world). Emhoff is not at all a traditional model, but that might be the point. She very much has her own style that seems to go with making her own statement to the world. Her clothes are different, one could say eclectic, and her appearance isn’t what one might expect. She is not Ivanka Trump.

And yet she’s doing some of the exact same things as Ivanka Trump and we don’t recall any conservative outrage. Ivanka still had jewelry for sale while her father was in the White House. Indeed, Kellyanne Conway violated an ethics rule against advertising commercial products while acting in her professional capacity. From CBS News:

“I’m gonna just going to give a free commercial here,” she said on “Fox & Friends” on Thursday. ”Go buy it today, everybody. You can find it online.” Her comments come a day after President Donald Trump complained on Twitter that retailer Nordstrom (JWN) had treated his daughter “so unfairly” by dropping her brand of clothing and shoes. 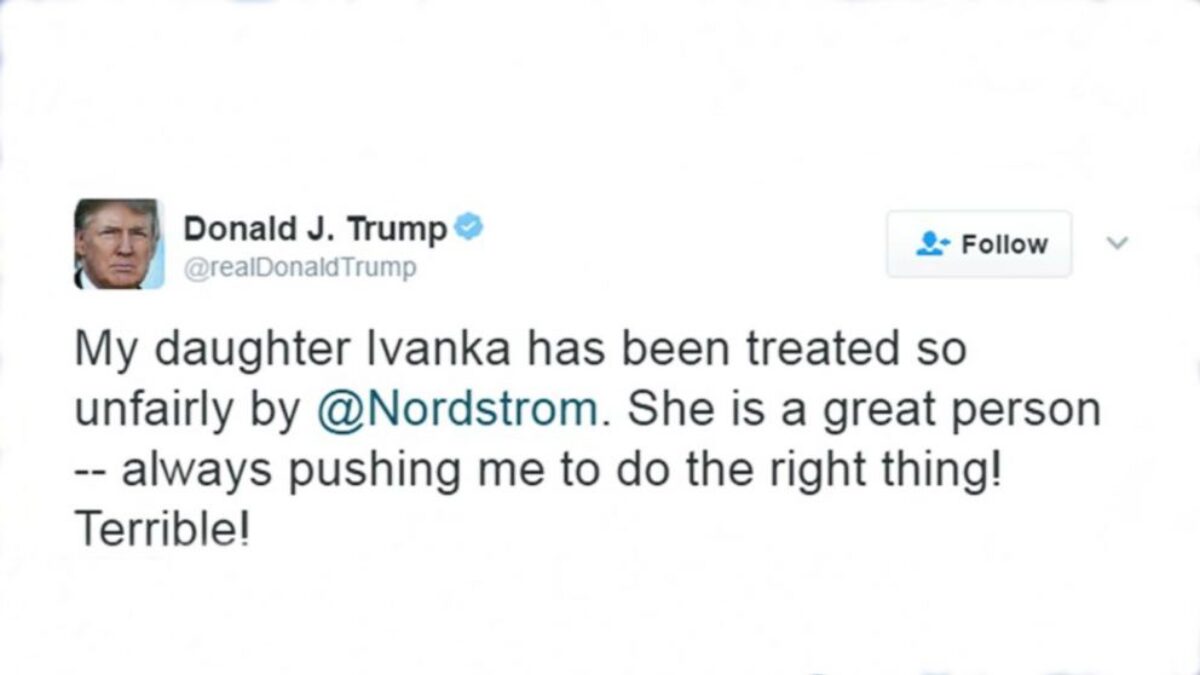 From The Patriot Gazette:

Ella told the New York Times that she, “was pretty surprised when everything with IMG was happening because when I was younger, I never saw that as being part of my timeline.”

Despite not being a traditional IMG Model, Emhoff has already reached more than 382,000 followers on Instagram.

Many will rightly claim the IMG modeling opportunity would not have presented itself for Emhoff without being the step-daughter to Vice President Kamala Harris.

We aren’t sure why the Gazette chose to link the “non-traditional model” thing with followers, but they are probably at least partly right about it not hurting that Emhoff’s stepmom is Vice-President. Show us a president’s child that didn’t benefit from being “in the family.”

But again, all of this was just fine when it was Ivanka. The commenters to this article do not think the contract is fine, nor do they think that Emhoff’s personal, non-traditional style is fine. Apparently, the conservatives only want models that look like Ivanka:

What… in the ever living fu*k… is that. It’s thoroughly laughable and disgusting at the same time, that these mentally ill people are shoved into the spotlight. What a riot it will be to see this dude destroyed by the same machine that his mothers ilk built.

Whatever happened to girls/women wanting to look attractive and pretty for themselves if not for someone else? Why would you show the sweaty hair under your arms and expect anyone to be attracted to you? And wearing an embroidered bra or hat went out in 1967 did ya know? Just a shame no one ever taught her how to be a lady, sure won’t learn it now.

Wow. What a shame that someone else would impose her beliefs on what Emhoff should care about. Maybe Emhoff never wanted to be “a lady” as defined by this woman? Is it possible that Emhoff is perfectly fine with who she is and comfortable in life, but the reader is not?

First of all she looks like a boy. She is NOT pretty at all. She needs new glasses or she is color blind. There is no way she would ever get this except by being related to “heels up harris”!!!! GOD HELP AMERICA!!!

First of all, why do they care what a woman looks like? What if Emhoff doesn’t want to be “pretty?” We don’t think that Emhoff represents America’s downfall, but this comment might. “Heels up harris?” Someone drops a fake meme in the Right and it’s picked up as a matter of faith because how else could a woman get ahead.

Ironic, the MAGAs criticize the stepdaughter for not “looking pretty” as a means to “be like a lady,” when her stepmom is very pretty and they accuse the stepmom of “being a ho.”

And of course the comparison to Melania:

Melania Trump can't get on a cover, but SHE gets a modeling deal?! https://t.co/qvV8pXBwGs

Remember, Melania never was willing to give an interview for a cover. You don’t just get to be a cover because you’re so pretty. With the cover is an interview of some sort and Melania always said no.

It is almost like women can’t get ahead no matter how they look? If one is the proud father of a 13-year-old sporty- very pretty girl who wears every sweatshirt ever made and last wore a dress at age five, this would sort of enrage a dad. How can a woman make her own way in the world?

Pro-Trump Texans Very Serious About Secession: Driving Democrats Out and Keeping Their Assets and Property