Leader of GOP Women’s Group Wants Us to Remember the Upside of Slavery, ‘Slaves Loved Their Owners’

Martha Huckabay is the president of the Woman’s Republican Club of New Orleans, and she’s recently defended a GOP lawmaker who believes schools should teach the “good” of slavery, Raw Story reports. She did so over the weekend in a Facebook post, where she also made it clear (inadvertently, I might add) that’s she’s forgotten how to use a dictionary or grammar book, but she is a Republican, after all, so what’s unusual about that?

Anyway, in her lengthy post, Huckabay, who’s also a former delegate for Donald Trump, attacked a CNN segment that criticized Louisiana GOP state Rep. Ray Garofalo, who claimed children should learn “about everything dealing with slavery, the good, the bad, the ugly.”

“You are right Stephanie Hilferty ‘none of us were around when slavery occurred,'” Huckabay wrote. “Slavery goes all the way back to Biblical times, and if you’ve read your Bible, you would know that many of the slaves loved their masters, and their masters loved them, and took very good of them and their families.”

The sad fact is that slavery has existed throughout civilization, so Huckabay has a minor point here. But marriages were often forced, frequently against the enslaved person’s will. And the slaves most drastically affected by this were women. It was rarely the happy situation Huckabay seems to think it was, but she soldiers on anyway to suggest “that some slaves never wanted to leave their plantation because it had become their home.”

Somehow she fails to mention that one huge reason slaves didn’t leave “their plantation” was the fear of harsh punishment if they were captured. That treatment included disfigurement from whippings, burns, or cuts.

In regards to slavery, the U.S. has a lot to answer for. But that’s not how this silly, ignorant woman sees it.

“We need to STOP allowing liberals 🙄 that have been indoctrinated through marxisum [sic] run our House and Senate,” Huckabay writes. “These people do not see threw [sic] clear lenses. Their views are scued [sic] and very one-sided. Slavery has been around since before Jesus Christ came to take away the sins of the world. Today’s ‘slavery’ topic is a leftist trap! It is neither true nor based on real facts.”

How sad that this woman is so ignorant. But she was a Trump delegate, so it’s par for the course. 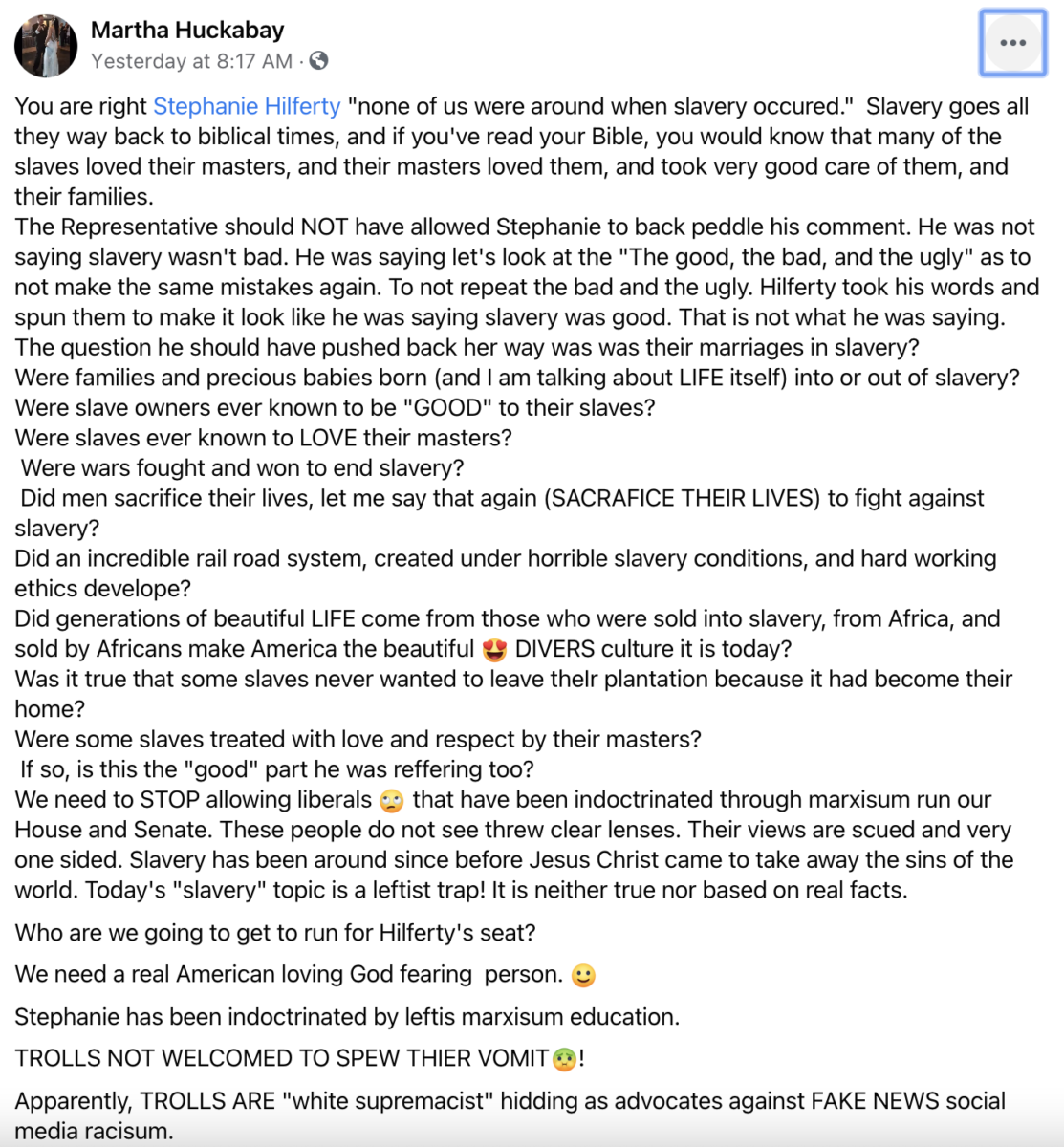