Trump Gloating Over ‘Huge’ Victory: Blogs That Cheney is a ‘Bitter, Horrible, Human Being’

Imagine a guy who won’t STFU about losing an election, an election that wasn’t even all that close, while demanding that everyone around him lie about that loss, imagine that guy calling someone else “bitter.” Imagine a guy whose every other sentence is a lie, who makes everyone who has ever been in his presence (seemingly) sign non-Disclosure Agreements, a man facing over 20 credible s*xual a$$ault allegations, a man banned from every single social media platform of any consequence because he was too dangerous, a man who must crush anyone whoever crosses him, a man who palled around with Epstein during the worst years, who walked through teen girls’ dressing rooms, and values money over everything, with the possible exception of those fantasies about his daughter, imagine that guy calling someone else a horrible human being.

There are people living in a hut in the South Pacific with no net, no television, no newspaper, no desire to hear anything about anything outside their own little island paradise, and yet those people still know that we are describing Donald Trump. Those very same people knew that Trump would come out with a statement today which served no function beyond Trump pounding his chest about his great victory.

But Trump could no more keep his mouth shut about Cheney’s ouster than he could donate $40 to the Girl Scouts, even to get cookies… even the samoas. In Trump’s world, Trump is the only one in need of anything. He is his own charity and he got a big donation today from the House Republicans. They put another band-aide over that terrible narcissistic injury to Trump’s aluminum foil frontal lobe. So he brags about it!!

“Liz Cheney is a bitter, horrible human being. I watched her yesterday and realized how bad she is for the Republican Party.”

He thinks we all have an IQ of about 65, roughly ten points below his. We totally believe that he cares about the future of the Republican party. Totally. He always puts the team first, always.

She has no personality or anything good having to do with politics or our Country. She is a talking point for Democrats, whether that means the Border, the gas lines, inflation, or destroying our economy. She is a warmonger whose family stupidly pushed us into the never-ending Middle East Disaster, draining our wealth and depleting our Great Military, the worst decision in our Country’s history. I look forward to soon watching her as a Paid Contributor on CNN or MSDNC! 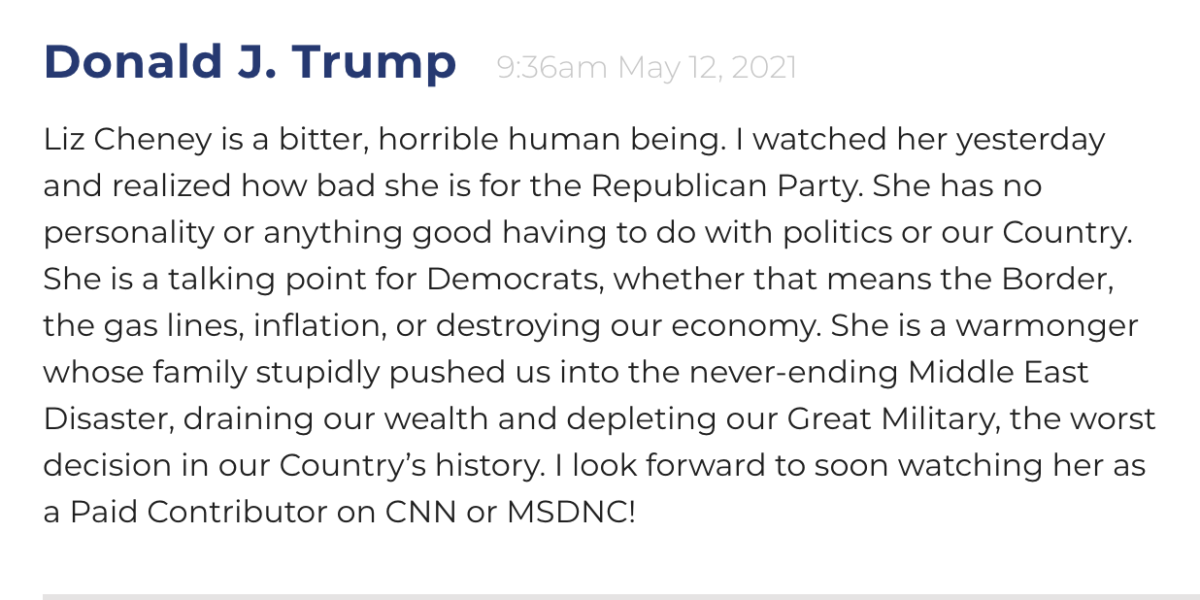 Her family is warmongering and awful, but the Republicans – while Trump was in office – kept her at number three. She was not penalized for her policy choices, only her “Trump” policy.

We could literally go on forever examining that statement but we all have lives that extend well beyond mocking Trump mercilessly. It is just good for the soul to donate a tiny slice of time. But that’s plenty.