It is a pretty reliable tip-off. When anyone begins a rant with an insult like “I don’t know who he is,” one can be sure that the ranter knows damned well “who he is,” because “he” is the guy who has been keeping our ranter awake at night.

The former president of the United States is often awake most of the night, as we know. He also has such thin skin, and so much free time, that he can monitor every channel (but not every social network stream) in search of whoever it might be who most infuriates him that day. Yesterday it was Miles Taylor, who was in the news talking about gathering a group of 100 former Republicans to start a new party to go against the “Trump-Republicans.” And that, you can be sure, hit Trump’s radar, tipping him off as to Taylor’s identity. Moreover, Taylor is the guy behind the “Anonymous” series, which infuriated Trump and sent the White House into a major investigation as to who it might be.

Taylor’s “anonymity” has been open since long before the election and we believe we can recall Trump tweets about him back in the day, we just cannot go back and confirm.

Regardless, Trump spent a great deal of his valuable time writing his longest message yet to strike back at the guy he doesn’t know! The first paragraph is so pathetic one wants to slap Trump on the top of the head.

A guy named Miles Taylor, who I have no idea who he is, don’t remember ever meeting him or having a conversation with, gets more publicity pretending he was in the inner circle of our Administration when he was definitely not. Some people refer to him as “absolutely nothing.” I hear he is on CNN and MSDNC all the time, but he had nothing to do with any of my decisions, and I wouldn’t even know what he looks like.

After telling us that Trump has no idea who this person might be, Trump then tells us all about him!

He is the guy who fraudulently wrote a make-believe book and statement to the failing New York Times calling himself “Anonymous.” That’s right, he, a lowlife that I didn’t know, was Anonymous. Now he’s putting together a group of RINOs and Losers who are coming out to protest President Trump despite our creating the greatest economy ever, getting us out of endless wars, rebuilding our Great Military, reducing taxes and regulations by historic levels, creating Space Force, appointing almost 300 Judges, and much, much more!

Wait, so you do know the guy?

He is a phony who will probably be sued over his fake book and fake “Anonymous” editorial, which caused so much treasonous stir. Miles Taylor and his fellow RINO losers like Tom Ridge, Christine Todd Whitman, and Crazy Barbara Comstock voted for Biden, and now look what they have—a socialist regime with collapsing borders, massive tax and regulation hikes, unrest in the Middle East, and long gas lines. He is even giving us men setting new records playing women’s sports. What a disaster for our Country it has been! 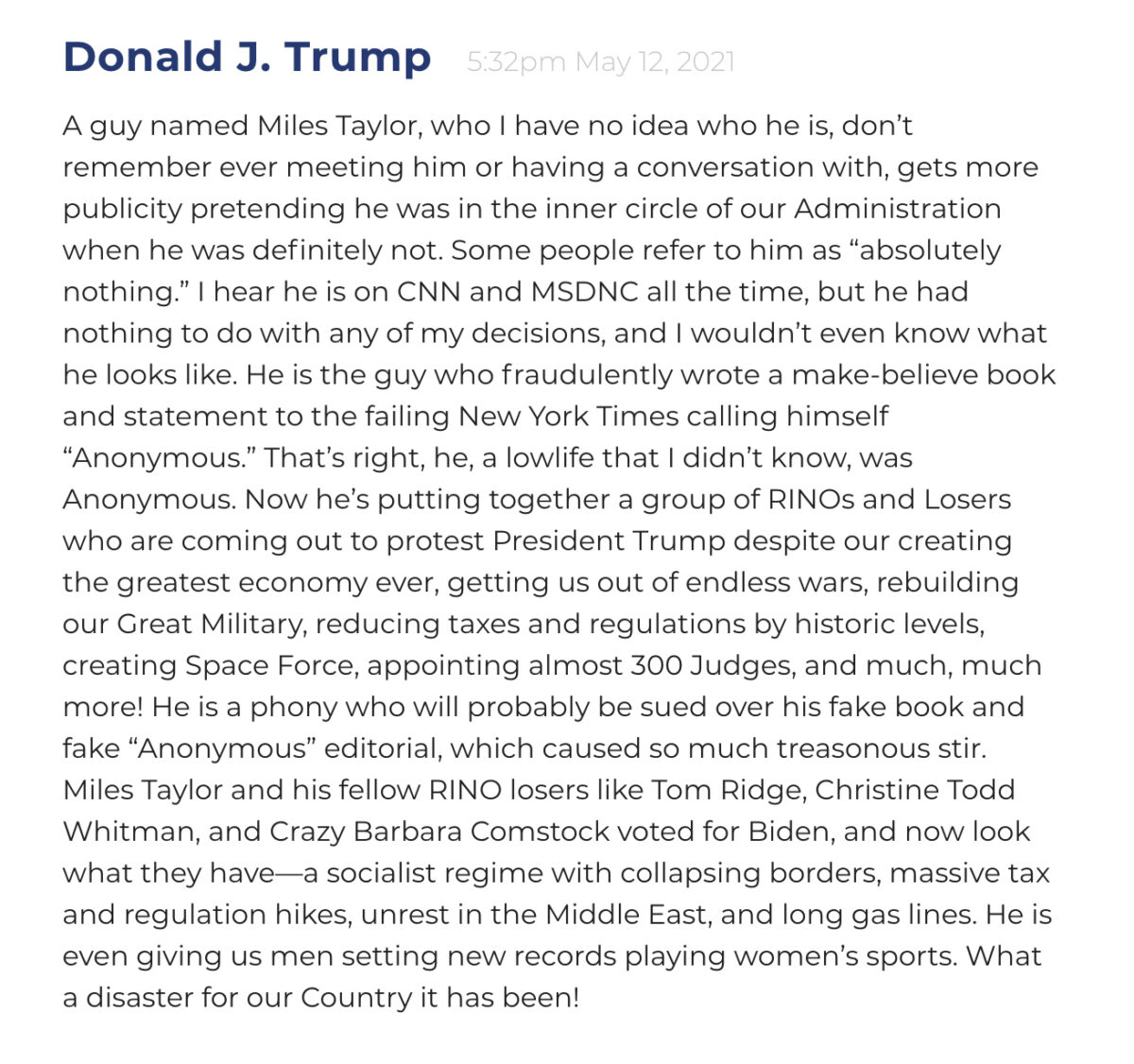 Trump even knows who Taylor voted for!

Trump went on to slam Biden, and said this disgusting line: “He is even giving us men setting new records playing women’s sports.”

Nice, huh? Some seriously homophobia for your Thursday.

Remember the days when former presidents just went away and let the new guy run things? I miss those days.

WHAT! Ikea Planned to Honor Juneteenth By Serving Fried Chicken and Watermelon