A Republican group has put up multiple billboards taunting former President Donald Trump and his supporters for their continued efforts to get the 2020 election overturned, and they hit Trump right where it hurts him most.

One of the billboards, from the group Republicans for Voting Rights, is in New York City’s Times Square and says: “Trump Lost. No more ‘audits’.”

New York City is Trump’s home. Yeah, he’s living at Mar-a-Lago, but New York City is his HOME and he’s been spending much of the summer in Bedminster, New Jersey, with many trips to his office at Trump Tower in NYC. So Trump will see this sign (unless his drivers purposely drive around it as to not anger him.)

On Wednesday, the Republican Accountability Project tweeted that they have “launched a billboard campaign across the country in response to reckless Republican calls for sham audits of the 2020 election”.

Today, Republicans for Voting Rights (RVR) launched a billboard campaign across the country in response to reckless Republican calls for sham audits of the 2020 election. Here's one we've put up in New York City's Times Square: pic.twitter.com/96tweL9l9w

Is that a thing of beauty or what??

The “billboards will run in Georgia, Florida, Texas, Pennsylvania, Arizona, and Michigan to denounce sham election audits that delegitimize our democratic process,” they added. 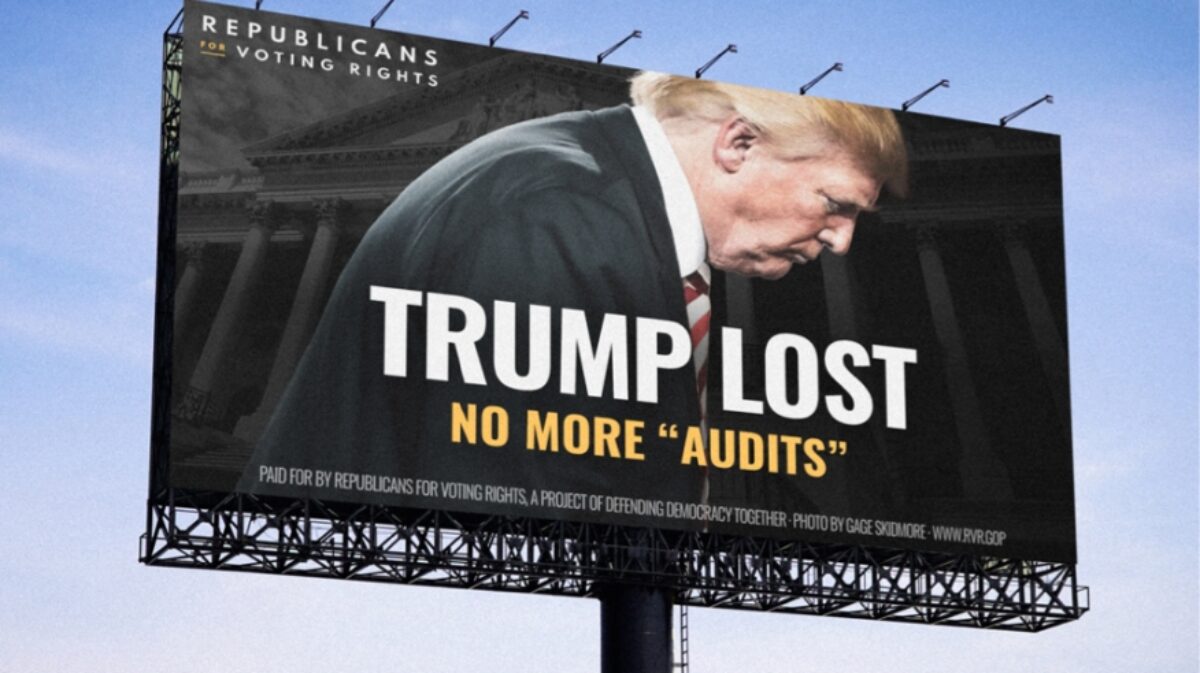 Republicans for Voting Rights says on their website that the campaign will cost a quarter of a million dollars and will “call on state lawmakers to reject frivolous audits of the 2020 election results”.

The “Trump lost” billboards will be seen in “major markets” in states where discussions of having audits of the 2020 election results are ongoing. There are even discussions of audits in Florida and Texas, two states that Trump won.

The Cybersecurity and Infrastructure Security Agency said in a statement on November 12, 2020: “The November 3rd election was the most secure in American history.”

Trump made the baseless claim that the 2020 election was stolen yet again when he called into a campaign event for Republican Virginia gubernatorial candidate Glenn Youngkin on Wednesday.

Former President Trump calls into the right-wing rally in Richmond and offers a full-throated endorsement of Glenn Youngkin. “I hope Glenn gets in there, and he'll straighten out Virginia,” Trump added. pic.twitter.com/mfred2YZUO

Trump issued a statement a few hours earlier, saying: “If we don’t solve the Presidential Election Fraud of 2020 (which we have thoroughly and conclusively documented), Republicans will not be voting in ’22 or ’24.”

“If we don’t solve the Presidential Election Fraud of 2020 (which we have thoroughly and conclusively documented), Republicans will not be voting in ‘22 or ‘24. It is the single most important thing for Republicans to do.” – President Donald J. Trump pic.twitter.com/eZAPCPIUu1

But Trump’s claims of fraud are based on nothing…he has zero evidence. An audit of the 2020 votes in Maricopa County, Arizona organized and led by Republicans recently showed that President Joe Biden did win, with his vote share actually increasing according to the heavily criticized review of votes.

Part of the audit in Maricopa County was funded by donations from Trump supporters, but the Associated Press reported in July that taxpayers in the county will now have to shell out $3m on new voting machines because the ones used in the 2020 election were compromised after being handled by companies not approved to be in control of such equipment.

It’s absolutely despicable. Trump simply can’t accept being a loser, which is why giant billboards calling him one are just such a great idea.