We have not independently confirmed the fact, but Kyle Rittenhouse states that he is an online student of Arizona State University, according to the New York Post. It is understood Rittenhouse is a student of ASU’s online school, which allows people to take online classes, but does not result in a degree.

Fine. Some of us are online members of the Royal Academy of Science in London in that we’ve watched every video for the last 3 years and some of us understand those lectures about as well as we’re sure Rittenhouse understands English 101 at ASU.

But Rittenhouse’s announcement has angered students at Arizona State and, according to the MAGA-Friendly New York Post, these “leftist” (always meant to invoke communist junta armies) groups are protesting. LINK:

Leftist students at Arizona State University are campaigning to get Kyle Rittenhouse kicked out of his studies — calling him a racist, “bl00d-thirsty m*rderer” even though the teen was acquitted of all charges.

Four groups led by Students for Socialism are behind a rally planned for Wednesday to boot Rittenhouse, 18, who revealed that he was an online student at the Tempe school and would like to live a quiet life on campus. 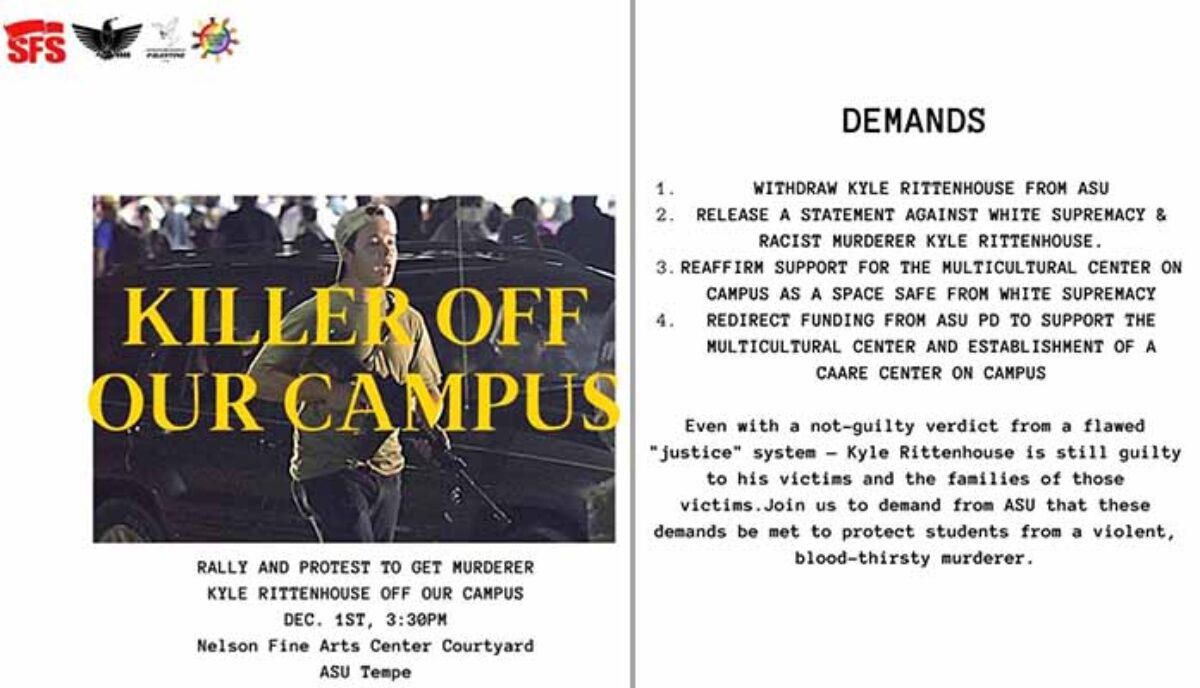 A list of four demands includes getting the 18-year-old withdrawn from ASU, as well as for the school to “release a statement against white supremacy and racist m*rderer Kyle Rittenhouse.”

It is wrong for them to call him a m*rderer. We have a system set up in this country to adjudicate official terms like that. The word is a legal term of art, there are other words that convey what he did that do not falsely proclaim him guilty of a crime. The way our justice system is set up, the jury could easily find it “more likely than not” or even that there is “clear and convincing” evidence that Rittenhouse committed m*rder, but until it’s proven beyond a reasonable doubt, he is innocent.

It would seem that if they took that word out and simply went on avowed racist – there is the unequivocal white power picture that exists – they would forego a lot of the “cancel culture” pushback they are going to get.

The way the announcement is worded is doing the students far more harm than good and makes them look like the unreasonable ones. Their cause is just. Their language is unhelpful to that cause.

In this site’s opinion.

Of course, most of the language on most flyers from most groups may be far more reasonable but the NY Post might just print the most aggressive and irresponsible.

[email protected] and on Substack: Much Ado About Everything

Mick Mulvaney Says Trump is Simply Too Old to Run for President, ‘Time for Trump to Go to the Sideline’