Donald Trump has a knack for making things look like they were his idea. Or at least, he thinks he does. Sometimes, however — most of the time, in fact — we find out that he was just trying to look tough.

Prior to Trump, no president had intentionally failed to appear at their successor’s inaugural ceremony in 152 years. But Trump was busy holding his own “departure” ceremony and then leaving town. Just before he went, though, he had a parting message:

To all of those who have asked, I will not be going to the Inauguration on January 20.

But guess what. Nobody had asked. In fact, Mitch McConnell, who was Senate Majority Leader at the time, was in the middle of trying to get together signatures for a letter he planned to send to Trump, telling him not to come.

That’s according to Jon Karl’s new book Betrayal: The Final Act of the Trump Show. In it, Karl writes that immediately after the Capitol siege on January 6, McConnell decided the risk of giving Trump a chance to somehow ruin the inauguration was unacceptable.

“McConnell wanted to get a letter together from the top four congressional leaders informing Trump that he had been disinvited,” Karl writes. He notes that House Minority Leader Kevin McCarthy was upset, arguing that it would be “an important message of unity to have Trump attend,” but that McConnell “was determined to disinvite Trump regardless of whether McCarthy would sign the letter.”

Well, guess who squealed to Donnie about the letter — McCarthy ran to Trump to let him know, and shortly after, he issued one final tweet saying he wouldn’t be there.

It seems fitting that even Trump’s very last tweet before he was booted off social media for good was a lie to make himself look tougher. 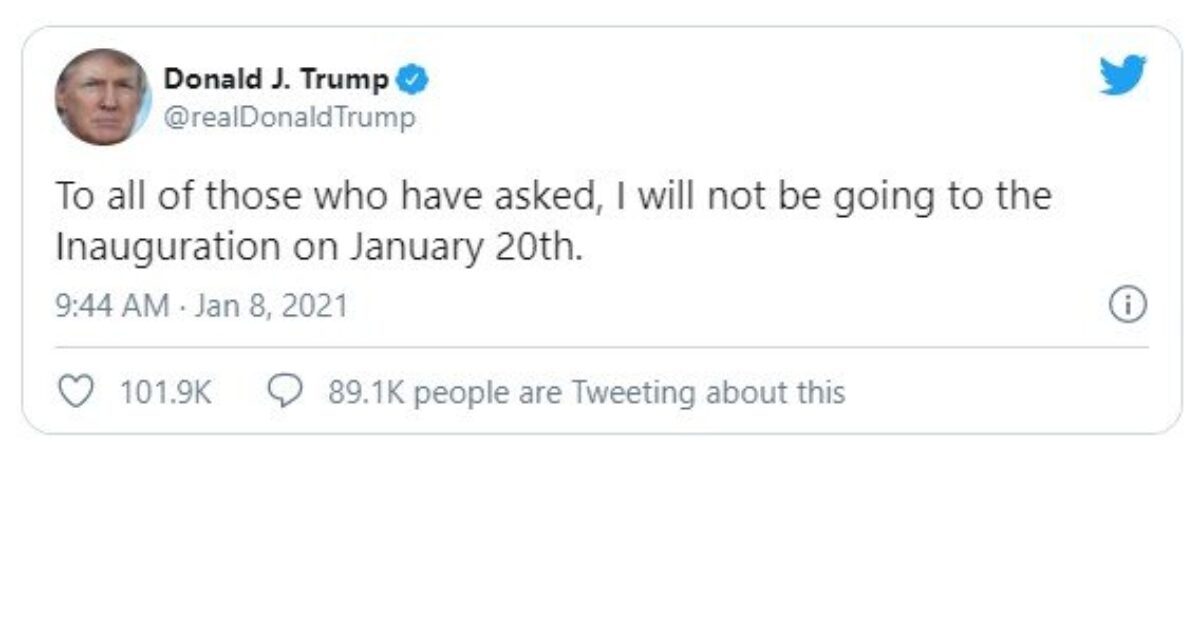 And of course Trump denies all of this, while calling Mitch McConnell an old crow at the same time:

"From Election Day, November 3rd, the day I realized that the 2020 Presidential Election was rigged, I would never have agreed to go to Joe Biden’s Inauguration. This decision was mine, and mine alone. The old broken-down Crow, Mitch McConnell… pic.twitter.com/pyAYyn11Dk

"had nothing to do with it. According to third-rate reporter Jonathan Karl of ABC Fake News, McConnell unsuccessfully tried getting a letter signed by others for me not to go. This was nothing I ever heard of and actually, if he ever did get it signed, I probably would have held

"my nose and gone. The Election was rigged, the facts are clear, and Mitch McConnell did nothing. He was probably too busy working on deals with China for his wife and family!"