Get Ready for Trump-Television, the Netflix-Type Streaming Service for MAGA Lovers

In an ad posted to multiple job sites on Wednesday, the Trump Media and Technology Group (TMTG) sought a “content development manager.” This person would be responsible for creating programming for ‘a ‘Big Tent’ platform offering broad-based entertainment rooted in free speech.”

That’s code for lying, of course.

Every time we hear Trump talking about free speech, we understand that he means having a platform to spread lies. That’s what he got kicked off social media for, however.

It’s actually ironic how many conservatives believe that “freedom of speech” means they get to have an unlimited license to say whatever they want, no matter how false, on as big a platform as is available.

According to Rolling Stone, the successful candidate for the TMTG position will “‘generate and develop internal concepts for original unscripted content, short-form series episodes and specials,’ remain ‘current on developing trends at networks,’ and ‘stay aware of emerging talent and upcoming non-scripted programming.’” 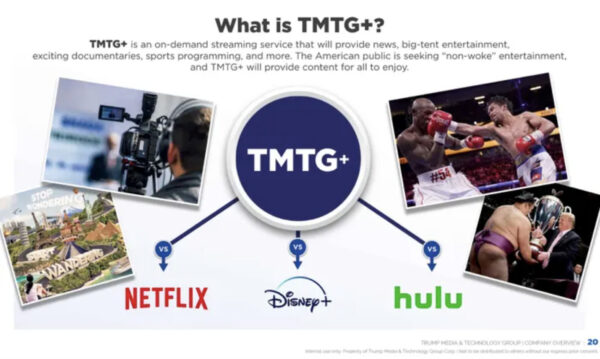 The ad makes it sound as though the streaming network could be hosting scripted dramas, sitcoms, and series, as well as non-scripted documentary programming and talk shows. It could even include reality TV, which producers always claim is non-scripted, but we all know is planned out well in advance.

Trump announced the creation of TMTG way back in October. He wanted an alternative to the media he thinks is biased against him. But there has been no bias. Instead, it has been his own behavior that got him “censored” by mainstream social media.

First, he began the floundering social network “Truth Social,” which even he hasn’t been participating on.

Then, jealous of his predecessor Barack Obama’s deal with Netflix, Trump decided to try his hand at a streaming service. Calling it TMTG+, Trump began to lay plans for the streaming service that would host One America News Network and other MAGA-friendly content.

Rolling Stone says that TMTG estimates around ten million subscribers. That’s a lot fewer than Netflix or Hulu, but would still rake in the big bucks, if it launches and is successful.