Photo of Trump With a Pretty, Young Thing Has People Asking Questions About Strange Bulge in His Pants, ‘Is That a Full Catheter Bag?’

Ok, first I want to set something straight.

As we age, sometimes we need help. Sometimes we have issues with our bladders and well, getting old sucks. Sometimes we become incontinent. I’m 52, and I must use reading glasses now. As we age our bodies change and there is absolutely no shame in that…it’s just biology and nature. So this article is not meant to shame anyone who uses a catheter bag or any similar type of medical device. The issue is with Trump.

First, Trump is planning on running for president again. He will be 78 when he runs and will turn 79 in June of his first year, if God forbid, he wins. The life expectancy in the US is 78.79 years. Trump probably has a higher one, rich people have access to the best doctors and hospitals, etc. But 79 is old. It just is. You aren’t as sharp at 79. Let’s be honest. Biden is 79 right now and he simply isn’t as sharp as he was at 59 or 69. It’s just the truth. But we trust Biden and the people around him to make the right decision if he feels he is unable to run the country. Trump would never do that. Trump is a narcissist with a basket full of personality disorders and his loss to Biden is something he will never recover from. He could be diagnosed with Alzheimer’s and wouldn’t tell a soul. He loves and needs power too much. Who cares about the country…not Trump.

There were many times during his presidency that we saw issues.

Just me or is Trump swinging his right leg around his body in an awkward-looking way?

In fact, his gait was often an issue that people noticed, especially since it was a sign of dementia:

Trump’s gait is deteriorating. His L foot slaps the ground. He can’t control his R leg as his R foot drags, stutters & crosses over to his L. This is how people start falling & why he’s been holding Melania’s hand. There’s been a recent steep decline-he waddled b4 his Iran speech https://t.co/6XpmyftNbF

Trump was also seen wobbling as he presented the National Medal of Arts:

Trump had an awards thing today. The music is good but his body, balance and movement are terrible. pic.twitter.com/AIULZe1V1Y

Now look at these videos where Trump doesn’t seem to be using his left arm:

So much going on here. Trump’s lifeless arm, no interaction/petting of dog, Mel wearing the drapes a la Carol Burnett. (Google it) pic.twitter.com/bQAmk0dfyW

I could go on and on. (Trust me, I have way too many examples of Trump’s failing health.)

So, when this photo of Trump with a rather young woman dressed in a bathrobe appeared on Twitter, many people were quick to notice that Trump had a weird bulge on his upper thigh. This is where a catheter bag would be, according to those on the internet. Of course, none of these people are doctors and it could just be weird lighting or an odd fold of his pants. But, it’s odd and we have a right to ask questions.

First, look at the photo: 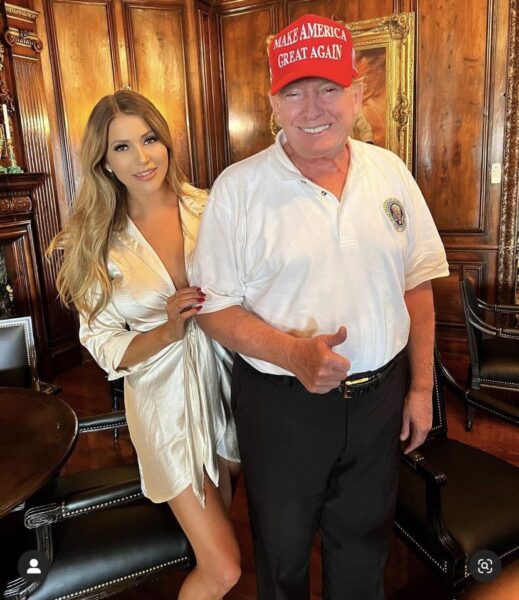 Now, look at the photo with the contrast increased. Look at his thigh: 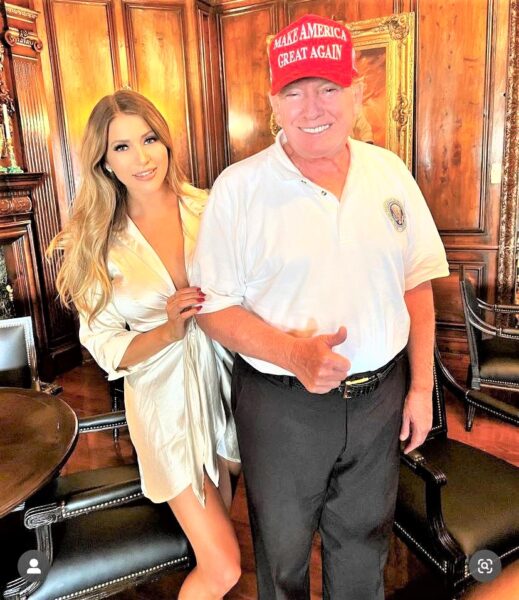 What the hell’s going on here???? pic.twitter.com/P9XCKZ0q8x

It's clear he's not well. In nearly every photo there is of him he has bandaids on his arms or hands (as he does here on his left arm) or bruises from IVs. Speculation suggests that the bulge under his pants in his thigh area is from a colostomy bag.
As for the nurse's aide – ?

I'd ask what's that lump in his pants but I don't want to know.

Any other president would lose credibility with a photo like this.

Looks like he's wearing a Foley catheter. 🤔He's not well.

Leg bag from his Foley catheter. I’d say it could be a condom catheter, but after Stormy’s description, there’s nothing much to attach it to.

Looks like the bag that you would wear on your leg to collect urine. pic.twitter.com/GsSlLAcMZL

A 75 year old man with what looks like a colostomy bag or a catheter bag on his left leg with a young girl he won’t be able to do anything with.