Why cover this? Why not? The man has well over 20 allegations of inappropriate behavior with women (and we’re using the lightest possible term on purpose). The other thing is that the tweet below has four pictures, each of which seems to show something odd, beyond normal Trump odd.

Additionally, as we’ve often noticed and written lately as applied to Trump’s health (and no more, we’re actually not fat-shaming here) he just keeps gaining weight.

It appears to us that Trump has two outfits to be worn for the rest of his life. He will either wear an ill-fitting suit, one that is far too big, with a tie that dives down far too long (Esquires editors say the tip of the tie should hit the square of the belt buckle), or Trump will be wearing a white polo shirt with the presidential seal, a label saying “President Donald J. Trump” on it – in case anyone at Mar-a-Lago is confused as to who Trump once was and who he continues to NOT be, “President.” And this shirt, unlike the ones we’ve seen before, also has MAGA on the collar… upside down. 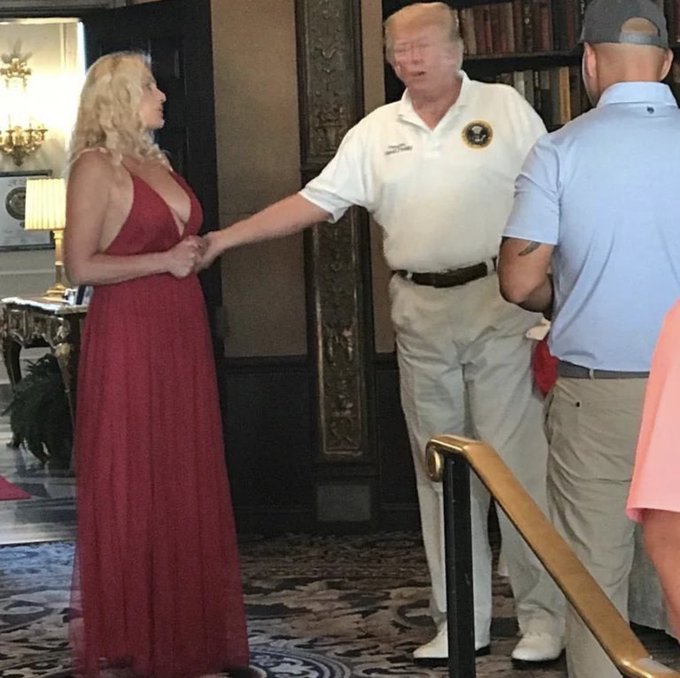 The four pictures also show a very beautiful blonde. Some on Twitter are ripping her as ugly or whatever – she may be dressed rather inappropriately, but that’s her decision. She’s an adult. It is a bit ridiculous. She is a beautiful woman, and Trump looks to be practically accosting her. If you look closely at Trump’s hand placement in the lower right picture, you’ll note why many women only approach Trump with both arms guarding every front part of their bodies, part of his hand seems to be brushing up against…

This woman doesn’t seem to mind. She also has her own hand right on Trump’s… bulging belly.

It’s her hand placement for me. pic.twitter.com/4ndnLuwl4F

When you order a new Ivanka from Wish.

He’s still walking around with the presidential Seal. ugh.

I don’t think she’s his type. That’s why he’s keeping her at arm’s length.