Happy Father’s Day everyone! I hope everyone is enjoying the day, and for those of you who might struggle silently today, you’re in my thoughts. Father’s Day (and Mother’s Day) can be difficult for those who don’t have their parents or have less-than-perfect relationships with their parents.

Like, imagine having Donald Trump as your father? Sure, the money would be nice, but you can make money. There are countless stories revealing just how awful a father Trump was. The first that comes to mind is that Trump was off shagging Stormy Daniels while his newborn son Barron was home with his wife. You don’t get those newborn days back. Those tiny squeaks, the sweaty, stinky, milk neck. All of that goes by so quickly. But nope, Trump didn’t care. He wanted to be in Lake Tahoe bumping uglies with an adult film star. 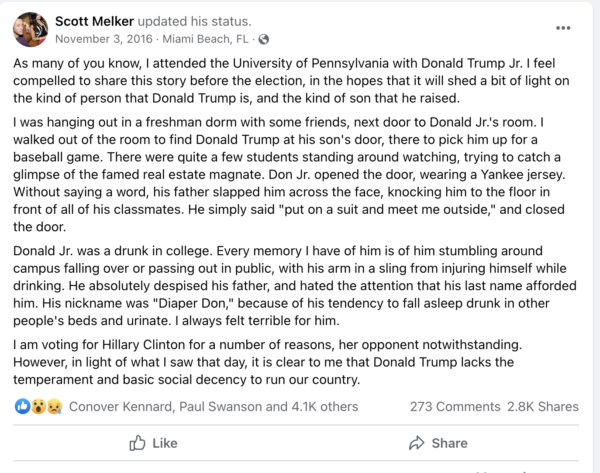 So, I would imagine Father’s Day isn’t a big deal for Trump. He obviously doesn’t enjoy being a father, unless it gives him a reason to brag about one of his children, and he only brags about Ivanka, and who knows where that’s going after she testified for the Jan 6 committee about him. So far none of his children have posted on their social media accounts about him. SAD!

But Trump still took to Truth Social, his social media site, to post, and what a post it was:

LOL. Someone is very scared!

And if you think there was some sweet message in another “truth” (the equivalent of a tweet), there wasn’t. Take a look:

Someone is terrified about Georgia (as he should be). 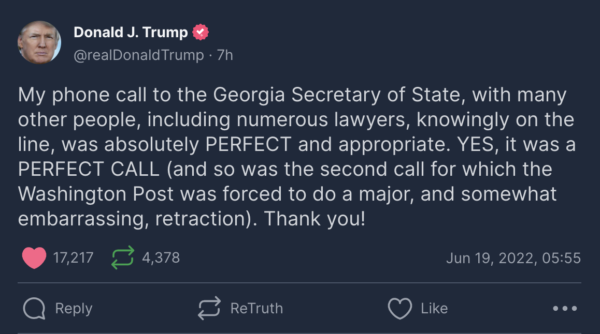 These aren’t even real polls. And he’s not looking at real polling data, he’s getting his info from the yes-men he surrounds himself with, just like he did in 2020. 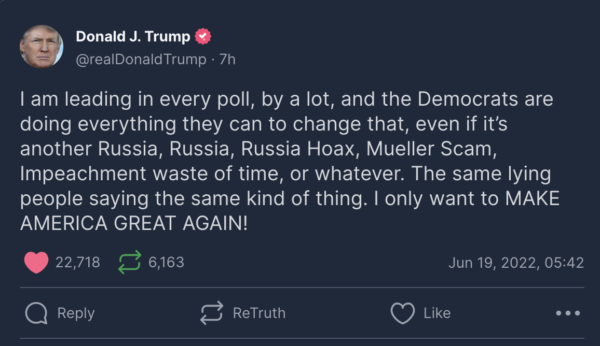 I always laugh when he calls the committee the “Unselect” committee. As if that’s super clever or something. 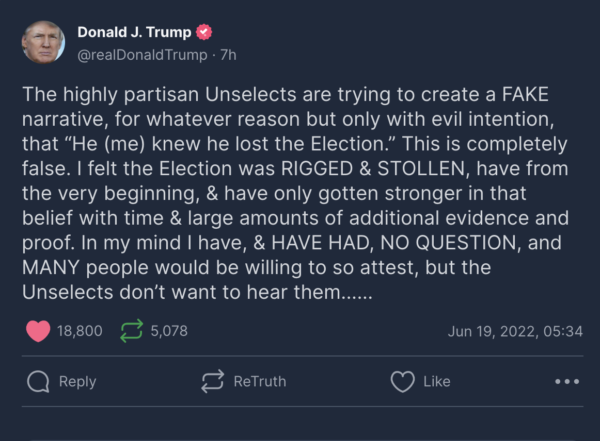 Trump’s also back to the big lies about everyone loving him. Same things he said in 2020, which didn’t work out very well for him:

Backstage at the VIP event, Trump says he just read something that said he is the most popular person in the country with Hispanics, “and I’m doing damn well with the black community.” pic.twitter.com/YxUxtJayKH

Ok, at first, I honestly thought this statement was real. I fell for it. I was writing, and saw it on Twitter, and said to myself, well look at that, Trump did put out a statement. And then I read it, AND I STILL BELIEVED IT. Trump could have written this. But alas, it is a parody. 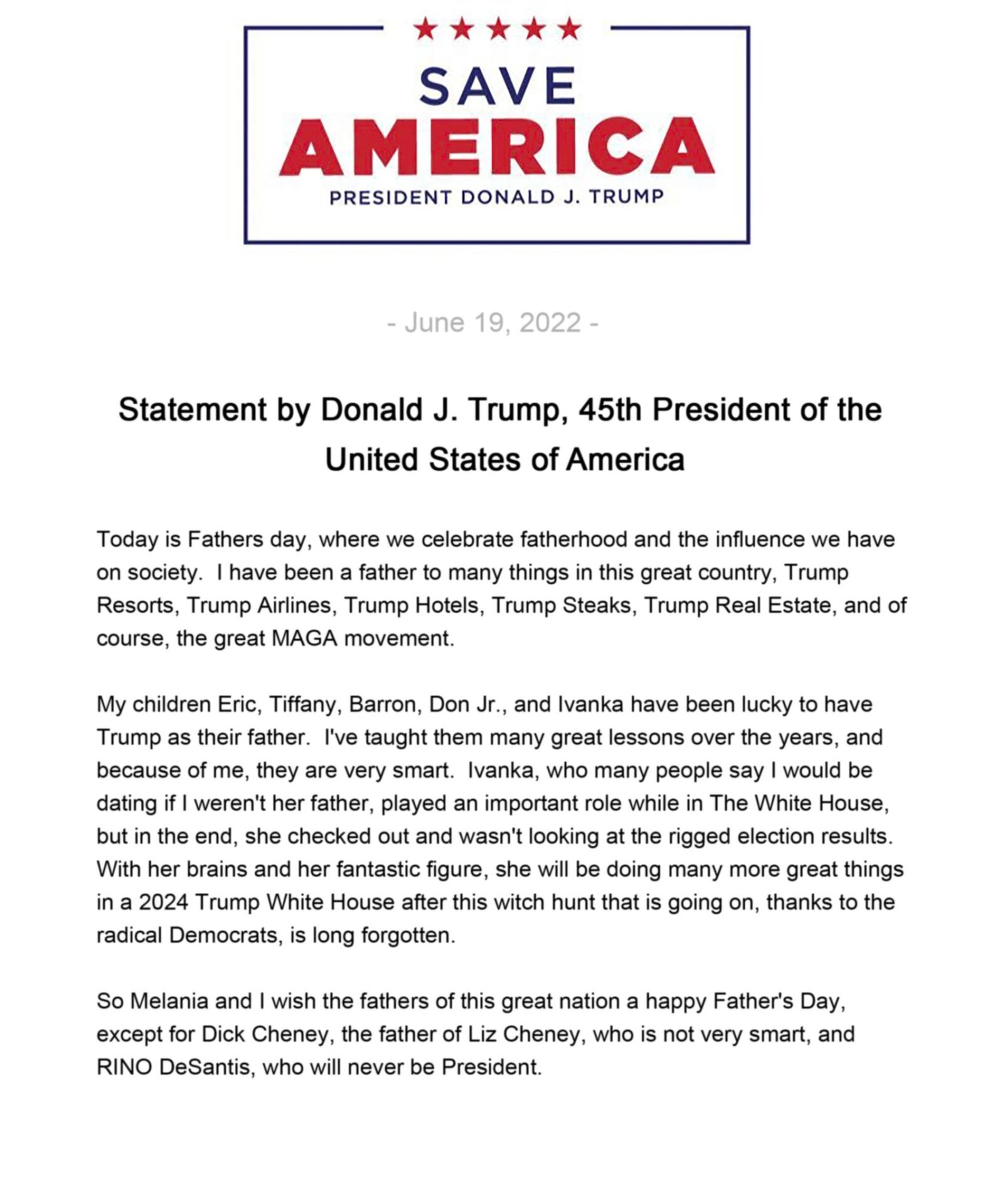 Statement by Donald J. Trump, 45th President of the United States of America

Today is Fathers day, where we celebrate fatherhood and the influence we have on society. I have been a father to many things in this great country, Trump Resorts, Trump Airlines, Trump Hotels, Trump Steaks, Trump Real Estate, and of course, the great MAGA movement.

My children Eric, Tiffany, Barron, Don Jr., and Ivanka have been lucky to have Trump as their father. I’ve taught them many great lessons over the years, and because of me, they are very smart. Ivanka, who many people say I would be dating if I weren’t her father, played an important role while in The White House, but in the end, she checked out and wasn’t looking at the rigged election results. With her brains and her fantastic figure, she will be doing many more great things in a 2024 Trump White House after this witch hunt that is going on, thanks to the radical Democrats, is long forgotten.

So Melania and I wish the fathers of this great nation a happy Father’s Day, except for Dick Cheney, the father of Liz Cheney, who is not very smart, and RINO DeSantis, who will never be President.

It’s just so good I believed it.

It goes to show how irrevocably broken this man is that people would read that and believe it to be true.

Twitter also called him out for his lack of a Father’s Day message.

If the pointy hat fits pic.twitter.com/DGRTZ7SfCS

It’s not as though Father’s Day means anything to the guy.
It’s actually perfect that his first thought is what’s being done ‘to him’.
The guy never threw a ball with his kids.
Never read to them at night, or tucked them in.
He was the father to them his was to him.
Absent & cold

I am sure that all his children & their SOs & kids will gather with him, Mel & Baron today in NJ. They'll have the Club grill up an American BBQ. They'll eat outside & play horseshoes while the young cousins have a blast playing. Laughter & love will fill his day. ❤️

He refuses to celebrate the day now that the only kid he liked has abandoned him.