Well, folks, I hope you’re enjoying that long, slow slide back into the 1950s. Because that’s where we’re headed. First, the Supreme Court overturned Roe v. Wade, and now it may take aim at same-sex marriage. And now a recent poll demonstrates that one-quarter of Republican voters are against Congress passing a law to protect interracial marriage.

I’m really depressed over all this. Aren’t you? And we have Supreme Court Justice Clarence Thomas to blame for some of this. Because when the SCOTUS overturned Roe v. Wade with a 5-4 decision in Dobbs v. Jackson Women’s Health Organization. As soon as this happened it opened the floodgates for marriage equality, access to contraception, and private intercourse in our own homes to be considered for the chopping block.

This is exactly what Thomas discussed in his concurring opinion, where he wrote that the court should “reconsider” other rights that were granted by previous SCOTUS decisions, citing Griswold v. Connecticut (a 1965 decision that granted the right of married people to purchase contraceptives), Lawrence v. Texas (this 2003 precedent allowed people to engage in private, consensual acts), and Obergefell v. Hodges (2015, the right to marriage equality).

Of course, Thomas didn’t bring up Loving v. Virginia, which banished laws that prohibited interracial marriage. That right has been included as a provision inside the Respect for Marriage Act, a bill that seeks to codify marriage rights as a way to offset Dobbs.

But now Politico Playbook PM newsletter has come out and the authors write that they polled the act as part of a Politico/Morning Consult poll. They pinpointed several results, part of which included this response to the question “Do you support or oppose Congress passing a federal law to protect the rights to… Interracial Marriage?”

The answer was sad and disappointing:

“On interracial marriage: Federal legislation has more lopsided support here: Seventy-one percent of voters, with just 15 percent opposing. (From the crosstabs: Twenty-five percent of Republican voters either somewhat or strongly oppose such a bill.)”

“That result — stunning by 2022 — doesn’t quite explain why the Respect For Marriage Act passed in the House of Representatives last week by a 267-157 margin, but Republican members voted against it by more than 3 to 1.” 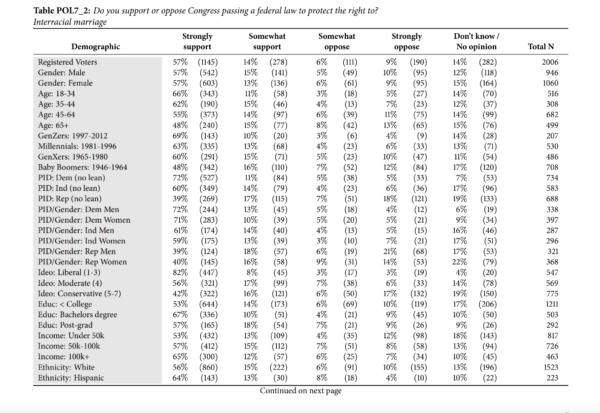 Perhaps the grist for their mill was this: The bill protects same-sex marriage, with a slim majority of all Republicans opposed to the poll, whereas a 58 percent majority of Americans support the bill.

But Republicans, including Supreme Court Justices like Clarence Thomas, don’t care about what the American public wants. They absolutely intend to impose draconian laws on us, come hell or high water. They really are dragging us back to the 1950s whether we want this or not. But if they are going to do this, could they at least bring back the diners where waitresses brought delicious food out to your car? That would be the one thing that wouldn’t suck.