Trump Raging on Truth Social About Pelosi Being in Taiwan, Pledging Revenge Against Those Who’ve Wronged Him

We were under the impression that it was critical that the U.S. confront China with strength. Actually, that’s the Trump line, usually, unless he has to bash Nancy Pelosi, and at that point, he falls in love with China like it’s North Korea.

It is very important to be strong with China. It is also important to fully understand and think through our very complex relationship with China, something that seems to have escaped the Trump administration. China has reached the point that it is an economic superpower and it is very quickly making steps toward becoming a military superpower. As such, their power needs to be kept in check. On the other hand, they are vital to the global economy, and our nation basically runs on Chinese parts. Thus, dealing with China requires a great deal of thought by people who really know what they’re doing.

The U.S. is currently doing the “tough on China” part by reminding China that they are not going to be allowed to take Taiwan by force. As part of that message, Nancy Pelosi is in Taipei today. The show of solidarity is important because the U.S. also benefits from its relationship with democratic Taiwan. Taiwan sees itself as an independent country, and though the U.S. recognizes that China considers Taiwan “historically Chinese,” the U.S. often acts as though Taiwan is an independent country. Nancy Pelosi has her reasons for going to Taiwan, and those reasons have been thoroughly thought through by administration officials that do nothing but think through our complex relationship with China.

Why is Crazy Nancy Pelosi in Taiwan. Always causing trouble. Nothing she does turns out well (Two failed Impeachments, loss of House, etc.). WATCH!

No one in this country’s intelligence community is about to tell YOU, Trump, why Pelosi is in Taiwan. And while we’re on the subject of “nothing turns out well,” what were you doing stepping into North Korea, acting as if they were a superpower? How’d that work out? All that love and NoKo is still testing missiles and building nukes.

And, of course, Trump had to get some bitter revenge out:

Knock out Impeachment Slime Jaime Herrera Beutler, Dan Newhouse, Peter Meijer, TODAY. The rest, including the now disgraced RINO, Liz Cheney, are either gone, or soon will be. Five are already quitters because they were so far behind. MAKE AMERICA GREAT AGAIN! 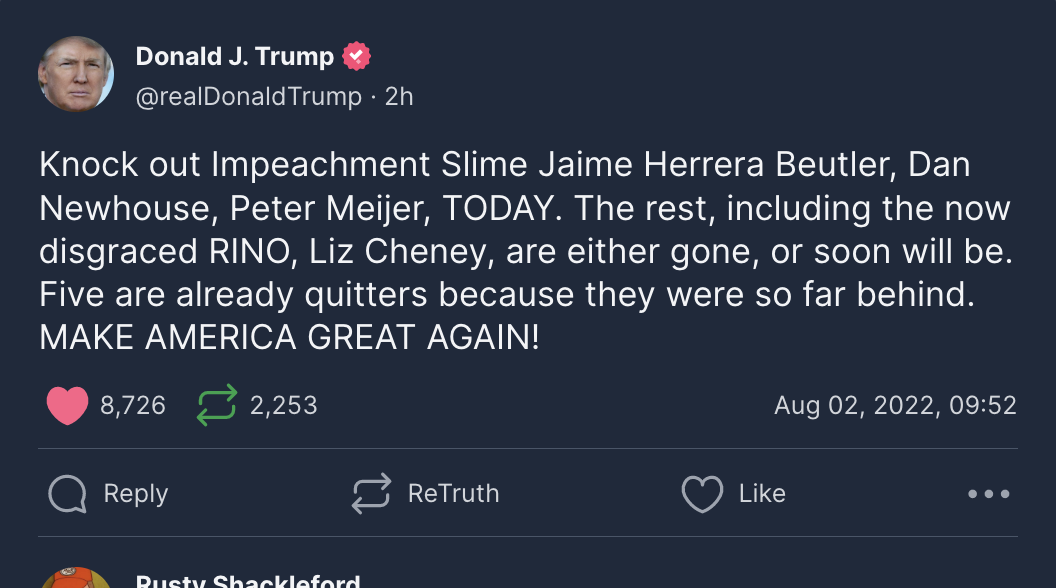 Absolutely nothing but hatred for everyone and anyone who displeased the big baby.

Reveng. Revenge. Revenge. We have no idea what he’s talking about with respect to five, undoubtedly people who voted to impeach him. They displeased him and must pay.