He participated in the deadly riot at the U.S. Capitol building wearing an anti-Semitic “Camp Auschwitz” hoodie-type sweatshirt over a Nazi Party T-shirt, and now 57-year-old Robert Keith Packer is facing the consequences of his actions, The Associated Press reports.

U.S. District Judge Carl Nichols handed Packer a stiff 75-day sentence during a video conference. Parker refused to address the judge, who noted the “incredibly offensive” language on Packer’s sweatshirt right before handing down the sentence.

That horribly offensive sweatshirt helped Packer, who lives in Virginia, become a symbol of the white supremacist, anti-Semitic hate groups as images of him inside the Capitol captured the media’s attention, CNN reports.

According to prosecutors, Packer made his way from Virginia to the pro-Trump rally on January 6 and entered the Capitol roughly six minutes after the initial breaching, even as he noticed shattered windows and the mob fighting police. As he spent 20 or so minutes inside the building he saw repeated clashes with the police.

Although Packer reportedly didn’t commit any violence while he was inside the Capitol, he received a steep sentence compared to other rioters. According to Nichols, Packer has a lengthy criminal record and that was why he handed down the stiff sentence. The judge also added that other defendants who received lighter sentences were not “as close to, or certainly as aware of the violence as Mr. Packer was.”

Packer was close enough to the violence, telling the FBI he was about 10 to 12 feet away from rioter Ashli Babbitt who was fatally shot by a police officer as she attempted to climb through the broken window of a barricaded door that lead to the Speaker’s Lobby.

“He told the agents he heard the shot and saw her fall back from the window as she was trying to climb through,” assistant U.S. Attorney Mona Furst wrote in a court filing.

Furst noted that when Packer was interviewed by the FBI, he showed no remorse for his actions.

“He was more interested in relaying how he received hate mail and how he was ‘hounded’ by the media for interviews,” she said.

Perhaps Sparky here doesn’t know that when you wear hate-infused clothing and those images are broadcast and made infamous, there’s a good chance you’ll receive hate mail.

Nichols had to wonder what led Packer to wear clothing bearing the “incredibly offensive” message.

“It seems to me he wore that sweatshirt for a reason,” the judge said. “We don’t know what the reason was because Mr. Parker hasn’t told us.”

Photos of Parker wearing the offensive sweatshirt quickly went viral after the attack on the Capitol. When FBI agents asked him why he wore it, he offered up a snarky “because I was cold,” wrote one federal prosecutor in a court filing.

Indeed his sweatshirt is about as offensive as things get. It depicts a human skull above the words “Camp Auschwitz.” The word “Staff” was printed on the back and it also bore the phrase “Work Brings Freedom.” This is a rough translation of the words that appeared above the entrance gate to Auschwitz, the concentration located in occupied Poland. The horrific fact is that more than one million men, women, and children were led to their deaths by the Nazis here. 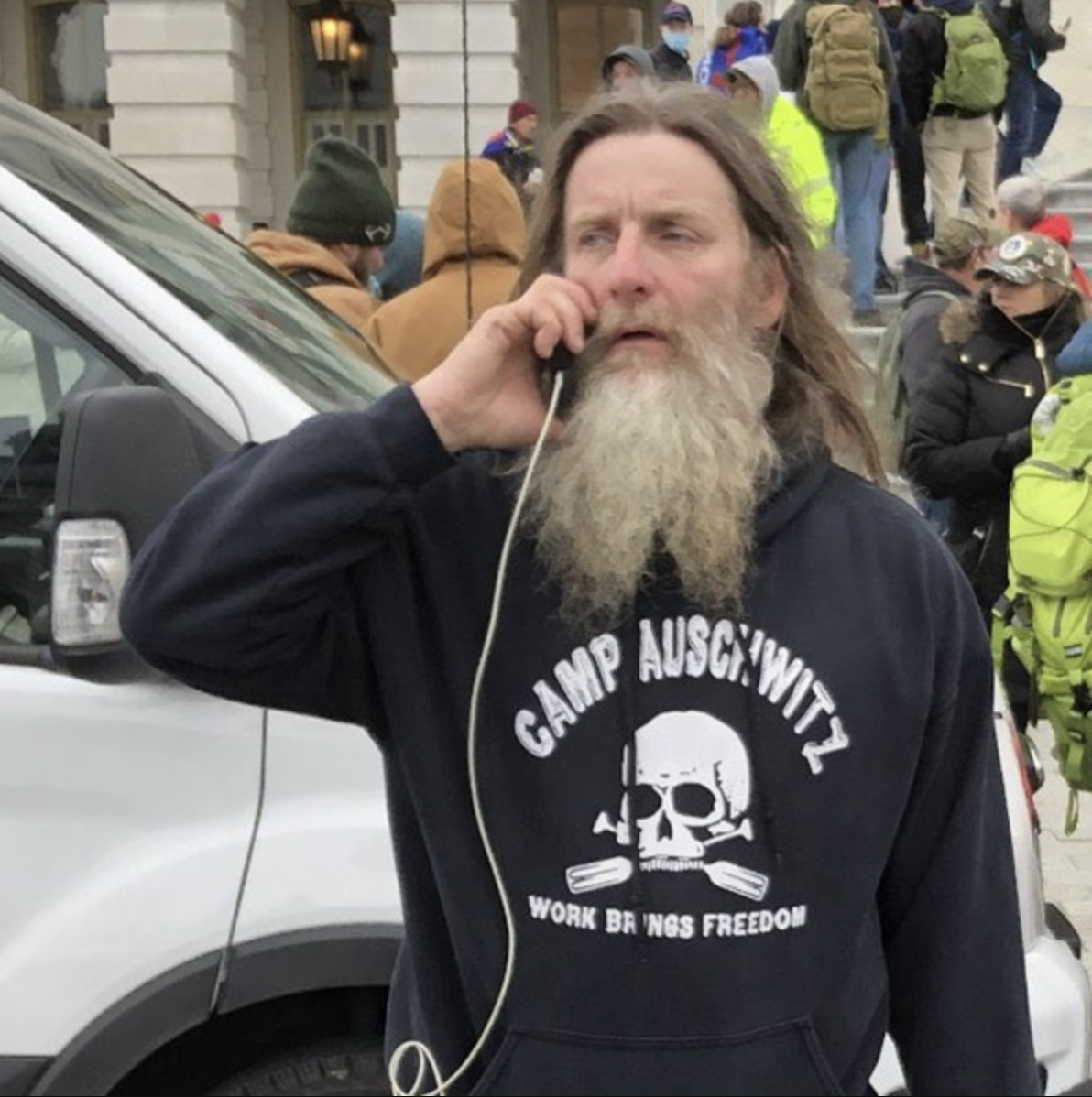 But that’s not the only offensive clothing Packer was wearing. On Wednesday Furst said she discovered he was also wearing an “SS” T-shirt — clearly a reference to the Nazi Party paramilitary organization founded by Adolf Hitler. Packer, Furst noted, “attacked the very government that gave him the freedom to express those beliefs, no matter how abhorrent or evil they may be,” when he joined the Donald Trump-supporting mob.

Furst told Nichols that Packer “wanted to support the subversion of our republic and keep a dictatorial ruler in place by force and violence.”

Defense attorney Stephen Brennwald argued that while Packer’s attire was “seriously offensive” it shouldn’t contribute to his sentence because he has a free speech right to wear it.

“It’s just awful that he wore that shirt that day,” Brennwald said. “I just don’t think it’s appropriate to give him extra time because of that because he’s allowed to wear it.”

But now I’m going to conclude with the extra special dumb part. The defense attorney said his client is also offended and angry that he was labeled a white supremacist “because he doesn’t see himself that way at all.” Brennwald said Packer wanted him to sue House Speaker Nancy Pelosi for connecting him to white supremacy during a press conference in the days after the riot.

I told you that was extra special dumb, now didn’t I? What did Packer think people would perceive him as by wearing those clothes? The hoodie and the T-shirt bore anti-Semitic messages commemorating a horrible time when innocent people were murdered simply on the basis of their religion.

So it’s fitting that Packer, who works as a self-employed pipe fitter has to sweat out those 75 days, followed by 36 months of probation. And he really does have an extensive criminal record, with 21 convictions, largely due to drunken driving and other motor vehicle offenses.