When Queen Elizabeth II passed away on September 8 at the age of 96, conspiracy theories full of all sorts of speculation surrounding her began popping up like weeds on social media. The latest one purports that she knighted former President Donald Trump in secret. Newsweek notes that isn’t the only conspiracy surrounding the late Monarch — there’s one that’s been disproven — that claims the Queen held information that could lead to the arrest of Hillary Clinton.

Then, of course, there’s the conspiracy that I wrote about last week — one that’s especially preposterous. Some QAnoniacs believe that King Charles III made Donald Trump president once again when he signed an oath to uphold the security of the Church of Scotland.

But the newest conspiracy, which claims Queen Elizabeth knighted Trump began circulating after an image claiming this was shared on social media after the Queen’s passing. The photo was allegedly posted by Trump himself on his Truth Social platform and it purportedly included a fake message that’s been attributed to Trump, and it read: “I never told anybody but she [Queen Elizabeth II] knighted me in private.”

The Associated Press, however, has debunked the claim that Trump ever made such a claim or posted the image on Truth Social. A Trump spokesperson contacted by the AP has confirmed the image is doctored, and the former president’s Truth Social profile doesn’t include the fake photo. The AP also researched the Internet Archive’s Wayback Machine and found no evidence of it ever showing up on any of his social media accounts. 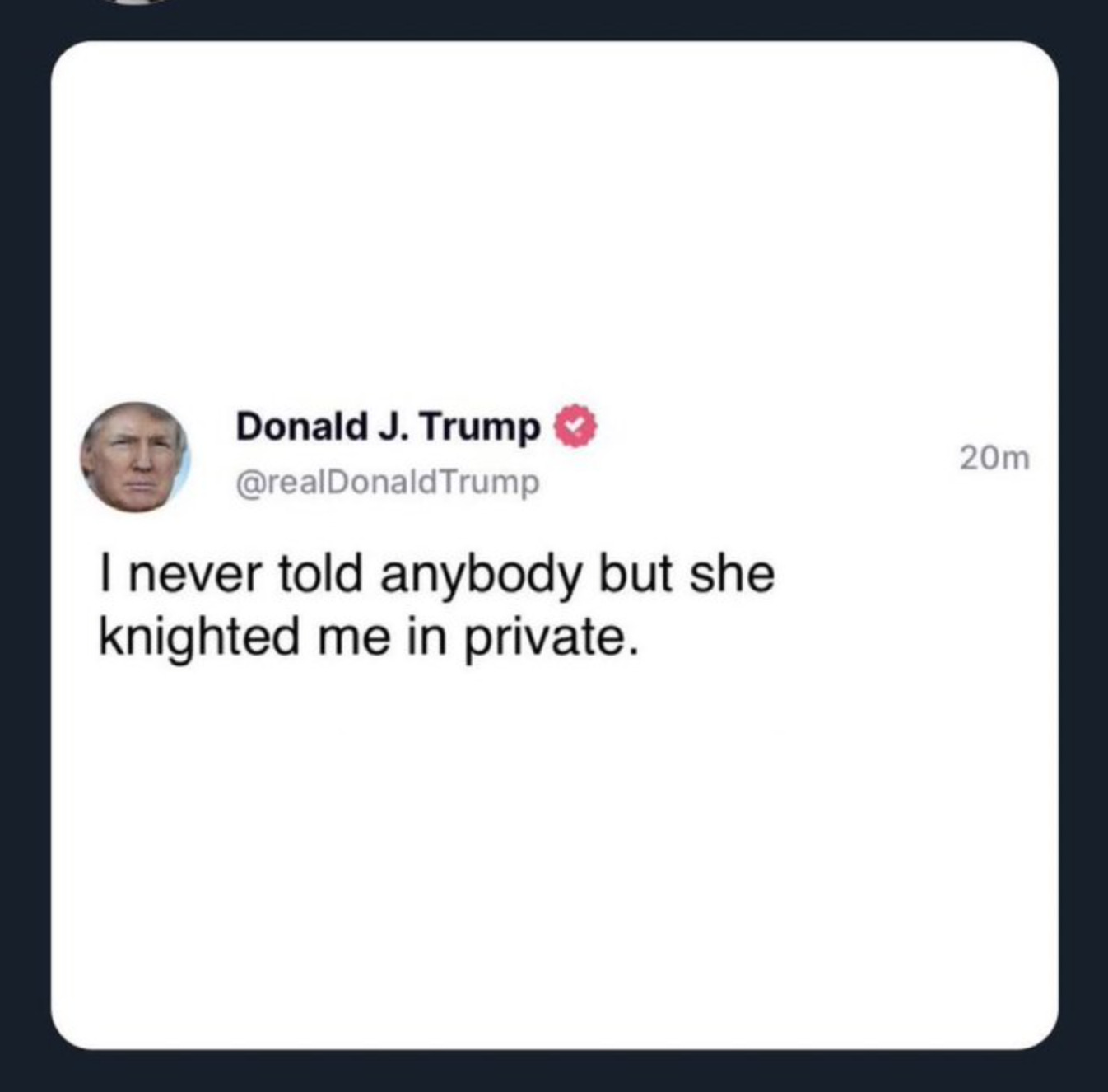 Agence France-Presse (AFP) has also been running a series of fact-checking stories regarding conspiracy theories that are tied to the queen, including one that involved a purported photo of Meghan Markle wearing a T-shirt after the queen’s passing featuring an illustration that appeared on The Smiths’ The Queen Is Dead album. But when the AFP fact-checked the image through a reverse-image search it found that Meghan was wearing a plain white T-shirt in the real photo with no artwork at all.

The AFP also investigated the conspiracy theory connected to Hillary Clinton and found that one to be just as fake as the other theories. In the days following the queen’s death, the quote “I have information that will lead to the arrest of Hillary Clinton” popped up on Facebook, Twitter, and Instagram and the AFP found that one was as completely made up as all the other conspiracy theories that purport the queen had some sort of information on Clinton.

As the AFP notes, there is a wellspring of fake posts and equally fake social media accounts created to share them, and all are part of an ongoing internet meme trend that seems to find all kinds of ways to baselessly connect the Clintons to various crimes. 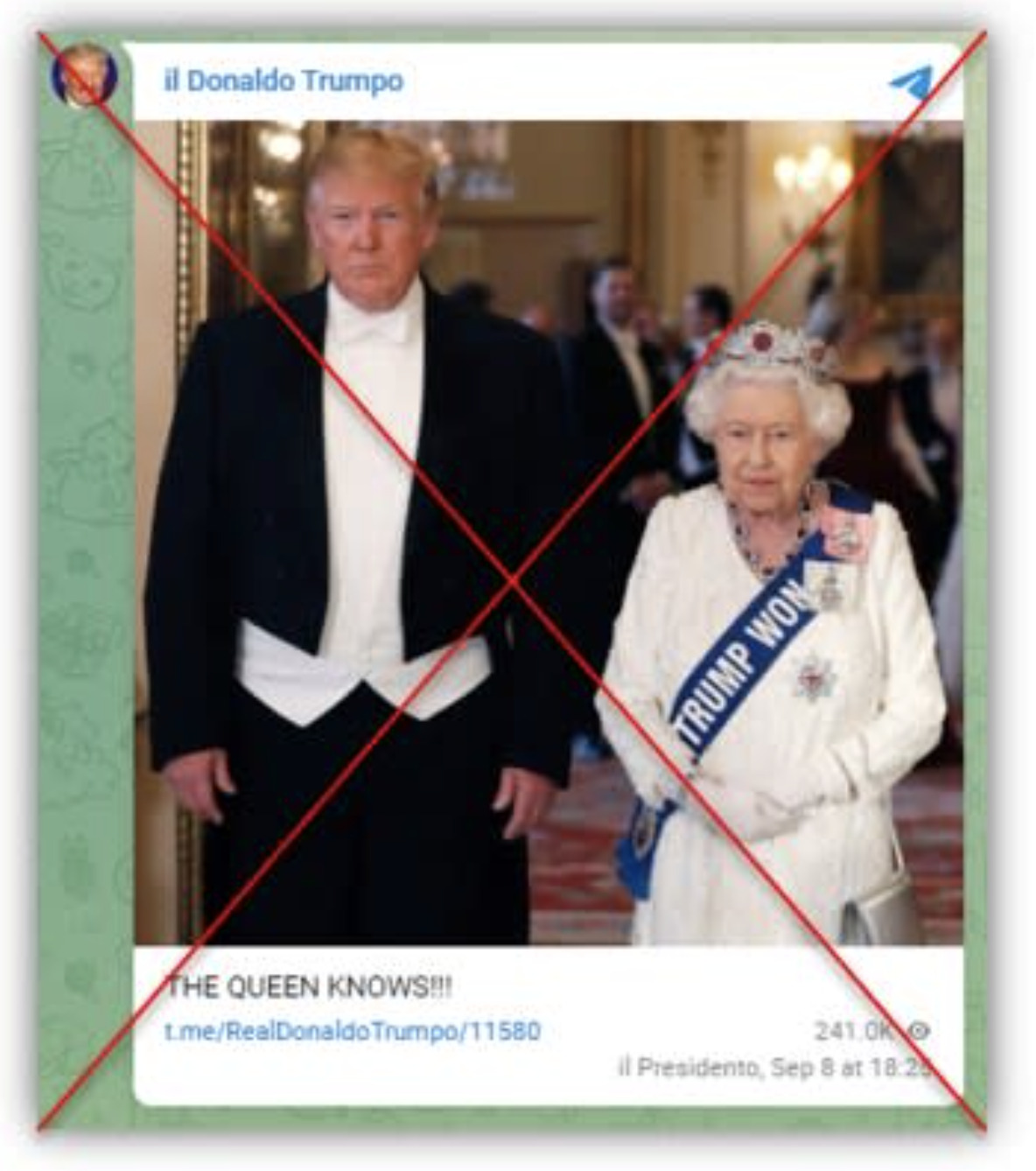 And of course these nonsensical claims about the Clintons are often spread by those who believe in far-right QAnon conspiracy theories. Insider reported some QAnoniacs have played a sizable part in spreading many of the baseless claims connecting Queen Elizabeth and American politicians. Others believe Princess Diana is still alive and will become queen. Another group of these fools baselessly claim Queen Elizabeth was murdered.

People who believe things like this are obviously gullible and ignorant. I’m sure there are actual, real conspiracy theories out there, and these wouldn’t likely be fantastical. I’m pretty sure JFK Jr. is still dead, there are no Jewish space lasers, and there is no Bigfoot. It seems to me that a real conspiracy theory would be complicated, but rock-solid, verifiably true.

But that’s just me.