Apparently, Don Lemon has lost his primetime slot on CNN. Of course, we’ve known for a while that CNN was about to take a hard right turn due to new management and a large MAGA shareholder. The move may have less to do with Lemon than it has to do with moving the right conservative into the slot.

Regardless, Donald Trump did what Donald Trump does with such unique and ugly passion, celebrating any sort of setback or perceived failure that falls upon someone Trump considers an “enemy.” Most of us who dislike others can simply confine our thoughts about their troubles to “not caring,” very, very few truly “celebrate” when something bad befalls another. Trump absolutely revels in it:

From his Truth Social account, try to clear out your brain for a second, read it as a generic paragraph, and guess at the age of the person who wrote it. It sounds like junior high:

A small step for television, a giant step for mankind. Don Lemon, often called “the dumbest man on television” having made even Lebron James look smart during their interview two years ago, has been FIRED from his prime time evening spot on CNN – extremely low ratings – and will be thrown into their “Death Valley” morning show. I assume this means a BIG salary cut prior to his Complete & Total future firing from Ratings Challenged (to put it mildly!) CNN. Good luck Don, you’ll need it! MAGA!!! 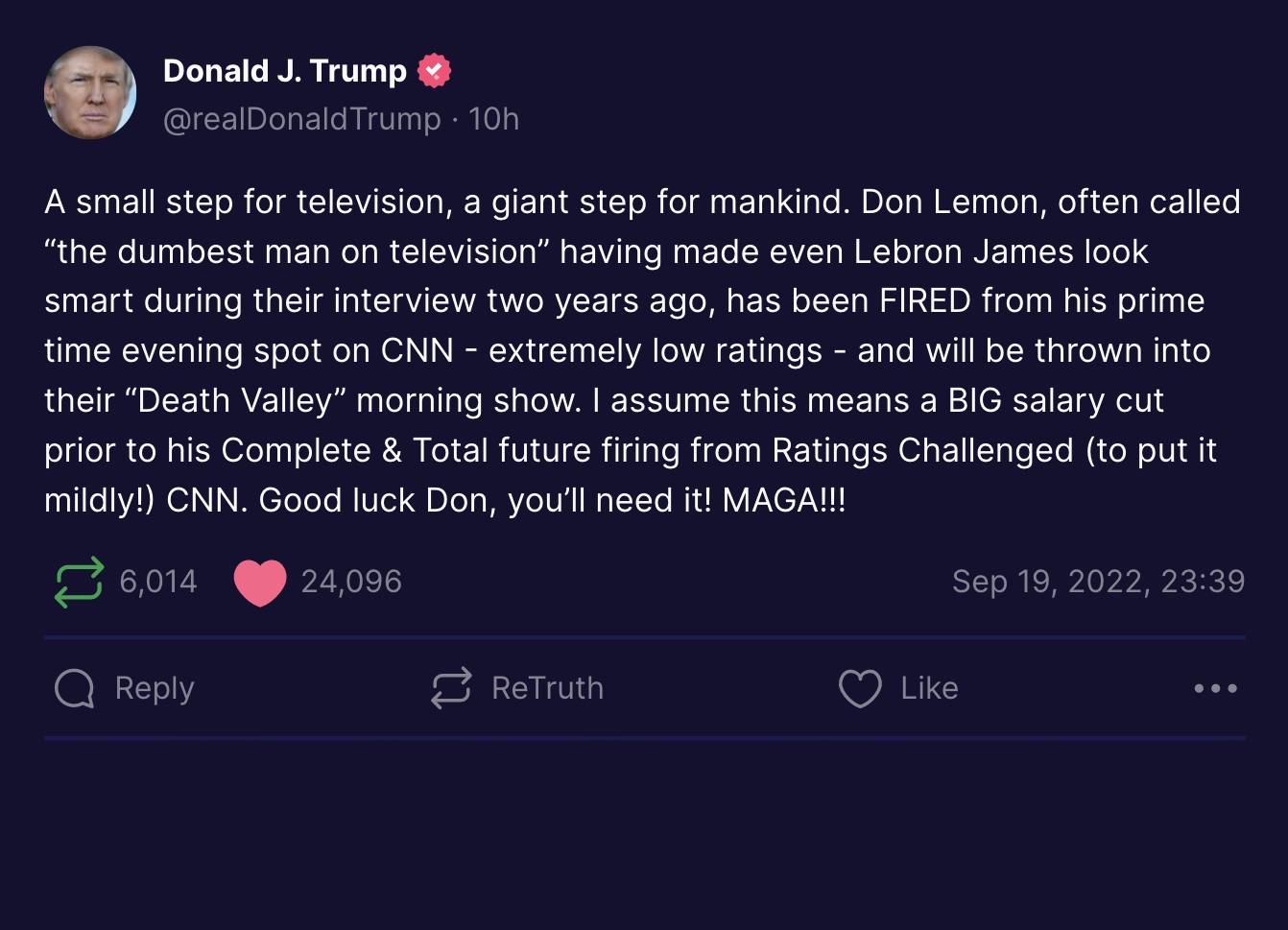 “Often called the dumbest man on television,” says the guy who forgot the comma after the phrase and spells “primetime” with two words. Of course, there’s just so much raw hatred in there because Lemon had no problem criticizing Trump. This is truly juvenile stuff.

Trump then got his second wind and continued, saying, “They call me a “ratings machine.” Don Lemon was also a ratings machine – in reverse. He killed ratings, ate them alive, and always will. If he interviewed Elvis, back from the dead, nobody would watch. Add him to the list of Joe Scarborough and his lovely, soothing bride. They are in the “can” also, but now can compete against “the dumbest man on television.” Should help them a lot!!!”

Interesting that Trump was up in the middle of the night. He must have some stuff on his mind.