This was his first attempt at “damage control.”

This past week, Kanye West called me to have dinner at Mar-a-Lago. Shortly thereafter, he unexpectedly showed up with three of his friends, whom I knew nothing about. We had dinner on Tuesday evening with many members present on the back patio. The dinner was quick and uneventful. They then left for the airport. 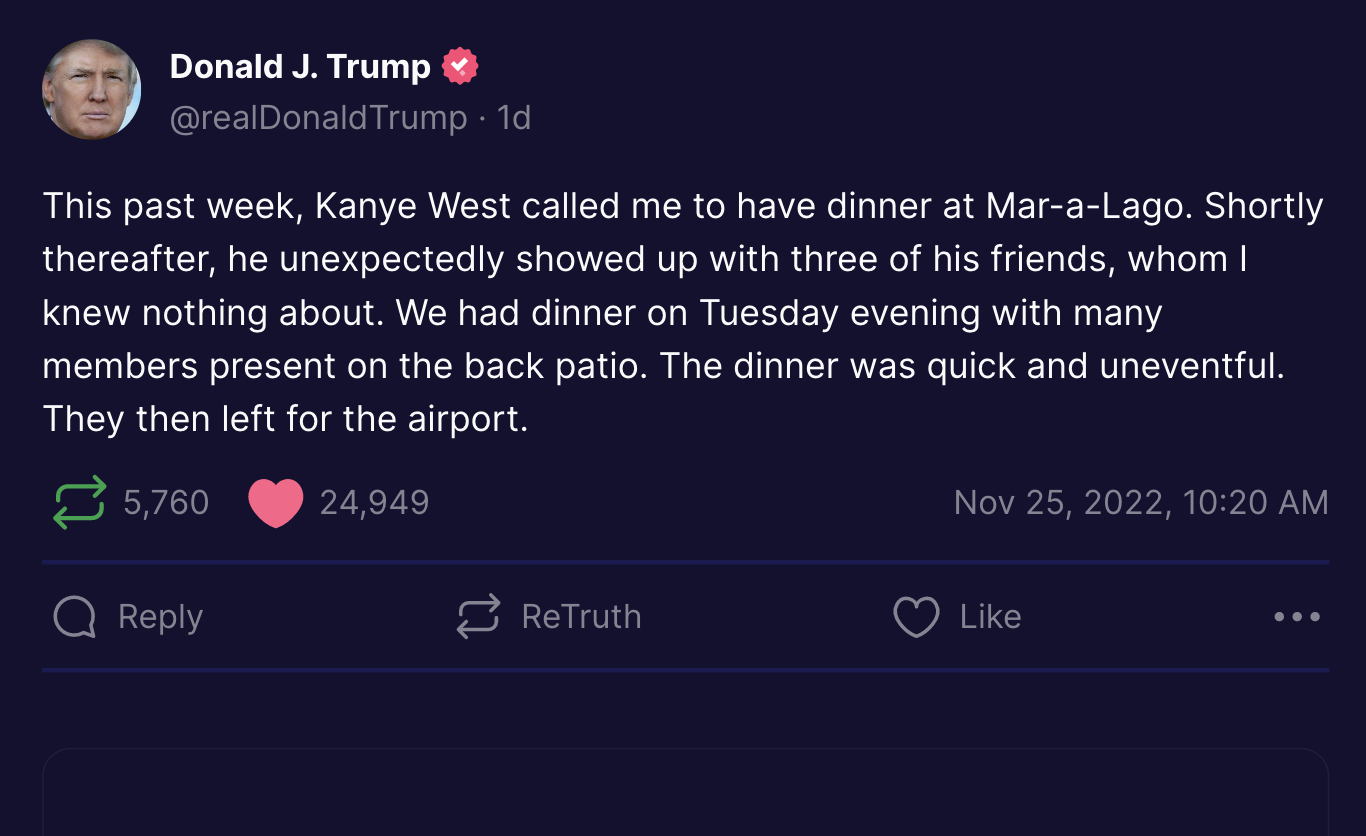 Details about the story continued to break over the day, and, as one of Trump’s aides said, “this is a fcking nightmare,” it became apparent that Trump had to say more. His choice was to give more specifics about the dinner and then mention  Fuentes by name but toss it off as a non-issue.

Ye, formerly known as Kanye West, was asking me for advice concerning some of his difficulties, in particular having to do with his business. We also discussed, to a lesser extent, politics, where I told him he should definitely not run for President, “any voters you may have should vote for TRUMP.” Anyway, we got along great, he expressed no anti-Semitism, & I appreciated all of the nice things he said about me on “Tucker Carlson.” Why wouldn’t I agree to meet? Also, I didn’t know Nick Fuentes. 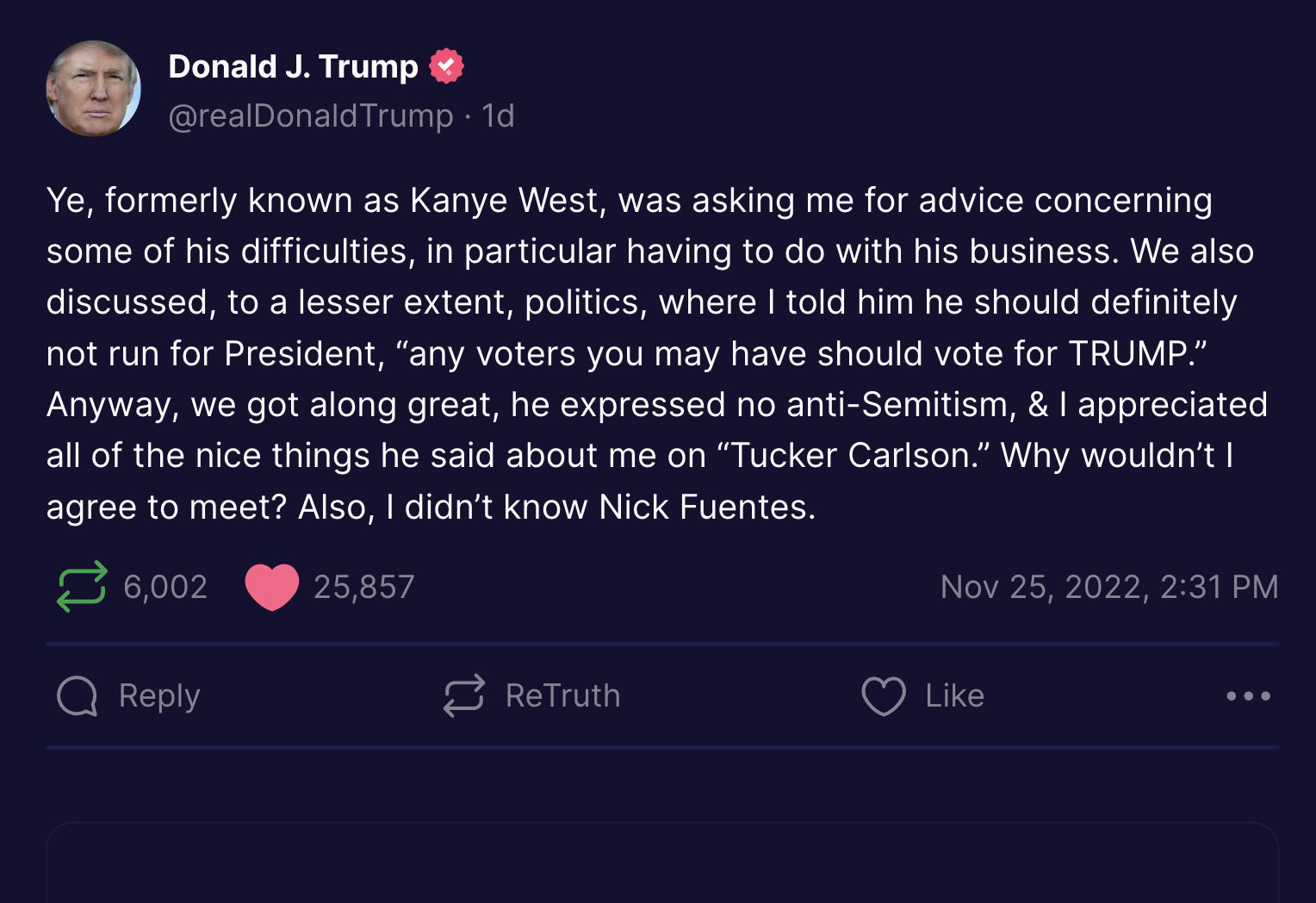 Now Trump knows he’s fkt; even people at the RNC are distancing themselves from him. Chris Christie just pronounced Trump unelectable in a general election, and Democrats have come out with statements that they hope Trump wins.

Does Trump come out with a post saying that even though he met Fuentes, he finds Fuentes’s beliefs abhorrent, and he apologizes to the Jewish and brown communities in this country? No, he doubles down as the victim! As he says, he was just helping a guy, who happens to be black and look at all the uproar. How unfair to poor Trump!

So I help a seriously troubled man, who just happens to be black, Ye (Kanye West), who has been decimated in his business and virtually everything else, and who has always been good to me, by allowing his request for a meeting at Mar-a-Lago, alone, so that I can give him very much needed “advice.” He shows up with 3 people, two of which I didn’t know, the other a political person who I haven’t seen in years. I told him don’t run for office, a total waste of time, can’t win. Fake News went CRAZY! 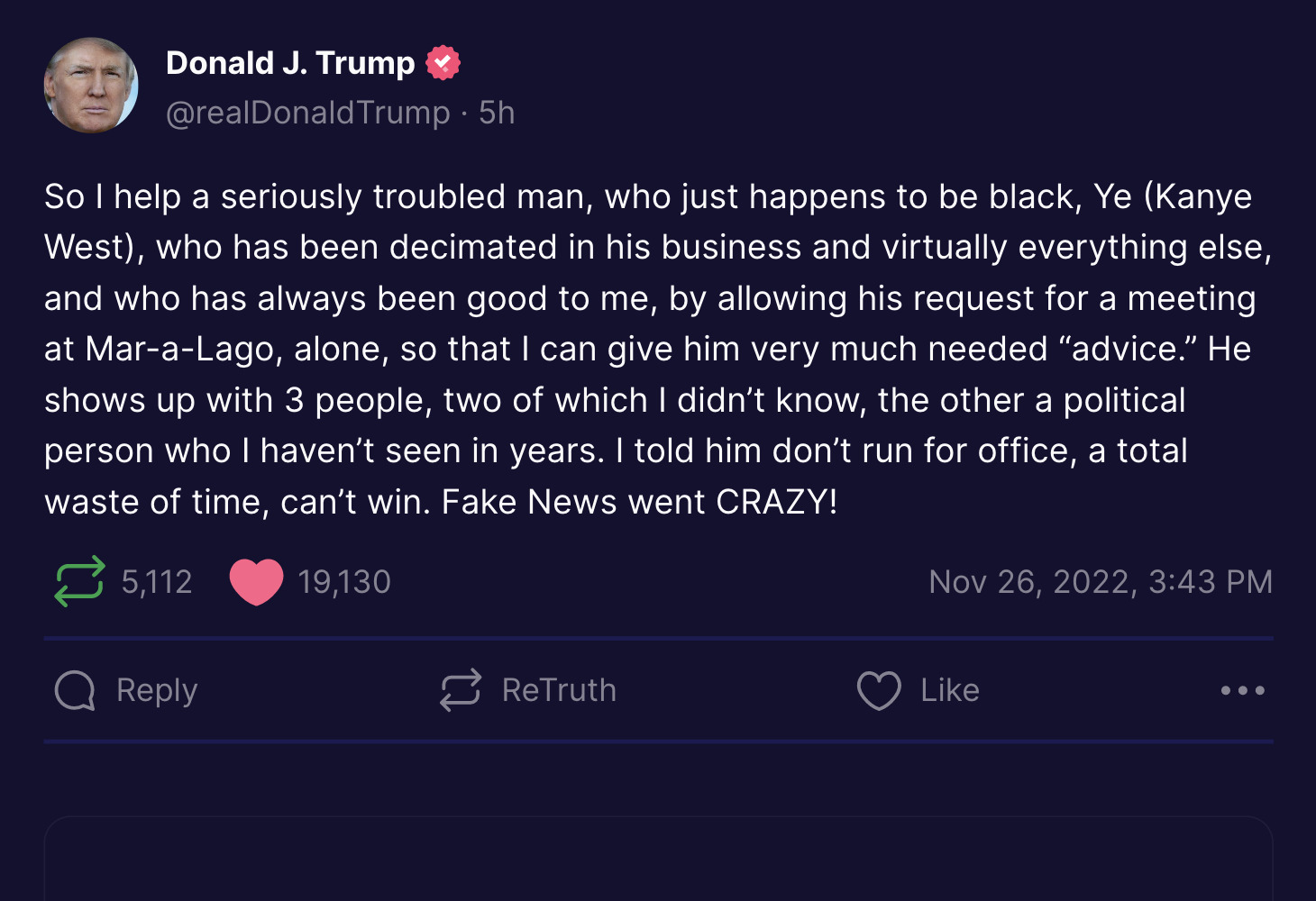 Yes, Don. Ye’s business has been “decimated” because he’s been so outwardly anti-Semitic. And you STILL have not apologized for not “looking into it more,” or said that you hate everything Fuentes stands for. This leads us to one conclusion.

Notice that Trump is getting angrier. He is getting more threatening, blaming the FAKE NEWS that hasn’t reported anything he’s disputed. Notice that Trump wanted to help Ye (because he’s always been good to me), who is in trouble precisely because he’s been so anti-Semitic. Did that not come up? That would be a very dark element of all this if it did not. Trump is the victim now, he won’t mention Fuentes, and he WON’T REPUDIATE what Fuentes believes! THIS is a problem for Trump, just as I predicted earlier in my Substack article. Trump is now in his comfort zone. He is the victim of “FAKE NEWS” reporting reality that he doesn’t need to acknowledge.

That is the darkest element. Trump doesn’t feel any sort of compulsion to note that he doesn’t share Fuentes’s beliefs. And we’re getting deeper and deeper into this. It should’ve come out by now, even from Trump.