Trump is Going INSANE on Truth Social Right Now With Deranged Posts, ‘May He Rot In Hell!’

Oh my good people, something big is about to happen to Donald Trump. Whenever Trump starts to lose his mind on Truth Social, you know something is brewing. And based on today’s posts, something BIG is brewing.

Now why Trump is seeing this as some good thing for him, I don’t know. This agent is the one who announced a few weeks before the 2016 election that there was no link between Trump and Russia.

Just to be clear, when the New York Times reported that the FBI saw “no link between Trump and Russia” — a week before the 2016 election — the FBI agent who was just arrested over ties to Russian oligarch Oleg Deripaska was heading up the investigation.

Then Trump woke up and really went for it. These posts come ahead of a state judicial hearing on Tuesday, in which Fulton County District Attorney Fani Willis will ask a judge to release the report by a special grand jury to the public about Trump’s efforts to interfere with the Georgia election results. So as you’d expect, we had to hear about that “perfect call”.

Trump said, “PAGE 1: My phone call to the Secretary of State of Georgia, and a second call which the Marxists, Communists, Racists, and RINOS don’t even want to talk about, were “PERFECT” calls. Many people, including lawyers for both sides, were knowingly on the line. I was protesting a RIGGED & STOLEN Election, which evidence proves it was. I won Georgia by a lot, but only needed a small number of votes from that total number. They cheated in many ways including STUFFING Ballots, ALL CAUGHT LIVE ON TAPE…” 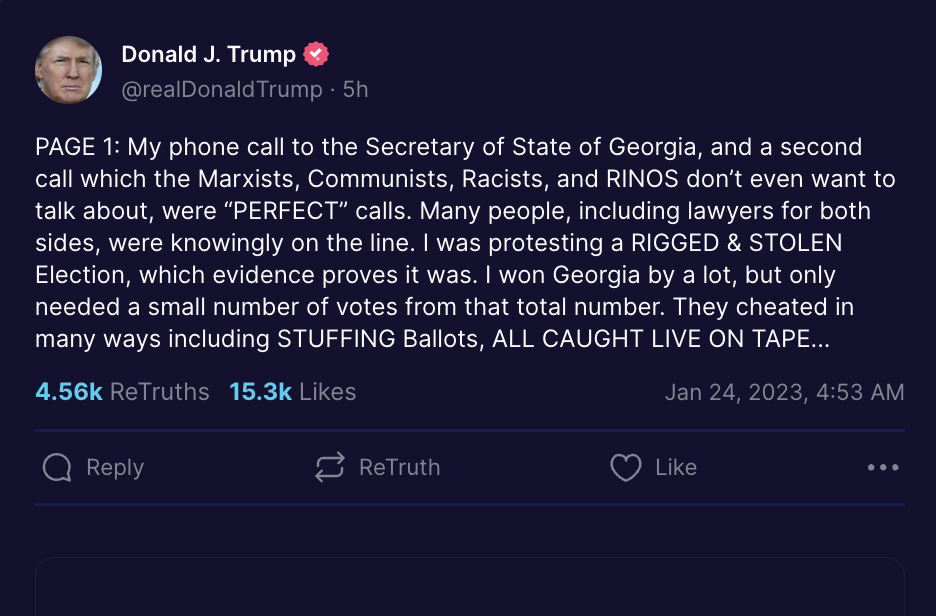 He continued, “PAGE 2: With many people on the line on what was a PERFECT call protesting the Rigged Georgia Election, which I have a clear right to do, and in fact an obligation to do since I made the call as President, how come not one person said, while on the call, that I acted inappropriately, or made a statement of protest at what I said, & then slammed down the phone. Not one, even with so many opposing people, lawyers, and others on the line. NO ADMONISHMENT at all. We nicely agreed to speak again….” 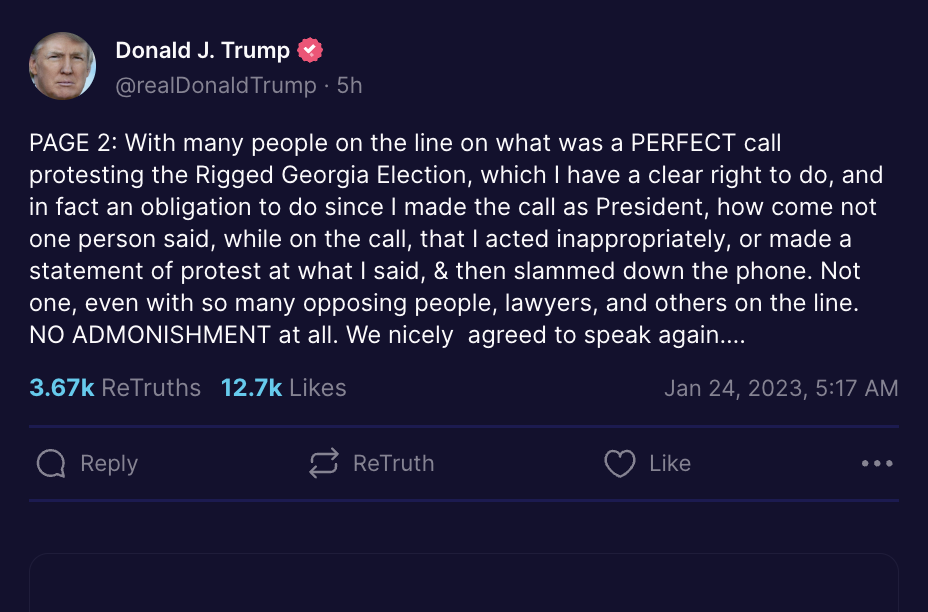 Then we get to PAGE 3, which he actually posted a few hours later, and said, “PAGE 3: That was the call to Georgia. It was PERFECT, nothing done or said wrong. We agreed to continue our conversation at a later date. The other call, that was probably taped by them illegally, was so good that when the Washington Post heard it, they did a retraction and apology because they were fed false information, perhaps by the Secretary of State’s office, and they were angry about it! The Election in Georgia was RIGGED AND STOLEN. We have all the evidence needed. That is the CRIME!” 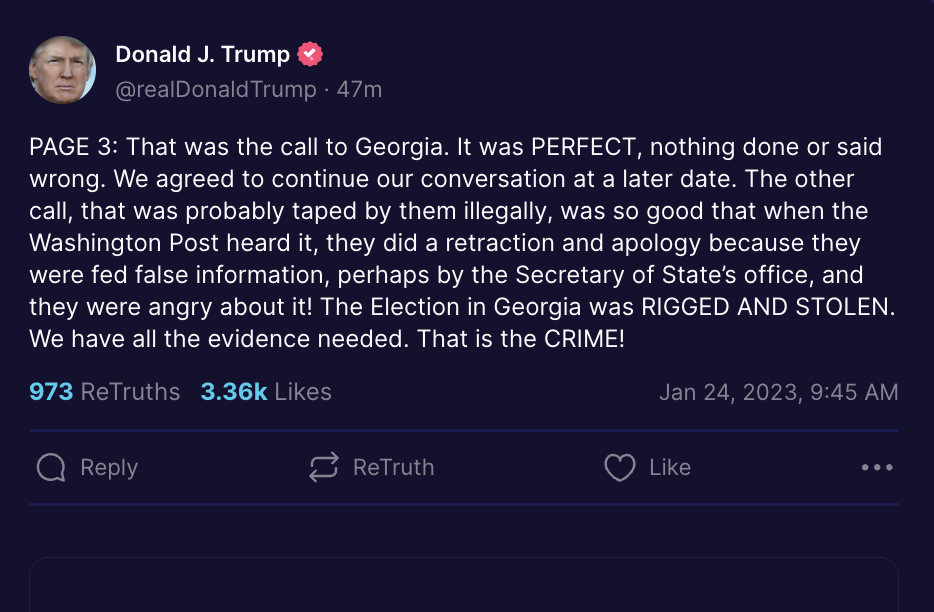 Then Trump went mostly ALL CAPS to say he’s the best president there ever was. “I did a GREAT job as President, maybe the best: STRONG BORDERS WITH WALLS (best ever!), REBUILT MILITARY, BIGGEST TAX & REGULATION CUTS & STRONGEST ECONOMY, WITH NO INFLATION & BEST EMPLOYMENT NUMBERS IN HISTORY, NO WARS, DEFEAT OF ISIS, TOTAL RESPECT ALL OVER THE WORLD! I Ran twice, did much better the second time (Rigged Election!), and now running again while I fight off the RACIST, MARXIST, RADICAL LEFT DEMOCRATS & RINOS WHO HAVE COMPLETELY WEAPONIZED OUR CORRUPT LAW ENFORCEMENT. MAGA!!!”

Trump then went nuts about the FBI guy again, “The FBI SleazeBag who was in charge of “investigating” me on RUSSIAGATE was JUST ARRESTED FOR RECIEVING MONEY FROM, get this, RUSSIA!!!These are the people I inherited from the corrupt FBI, including Comey and his crooked band of Misfits and Thugs. Now, the “Gestapo”may be even worse, with the RAID on Mar-a-Lago, the Horrible and Unconstitutional treatment of January 6 PATRIOTS, and the lack of action on ANTIFA, BLM, & the rest. Shameful!!! MAKE AMERICA GREAT AGAIN” 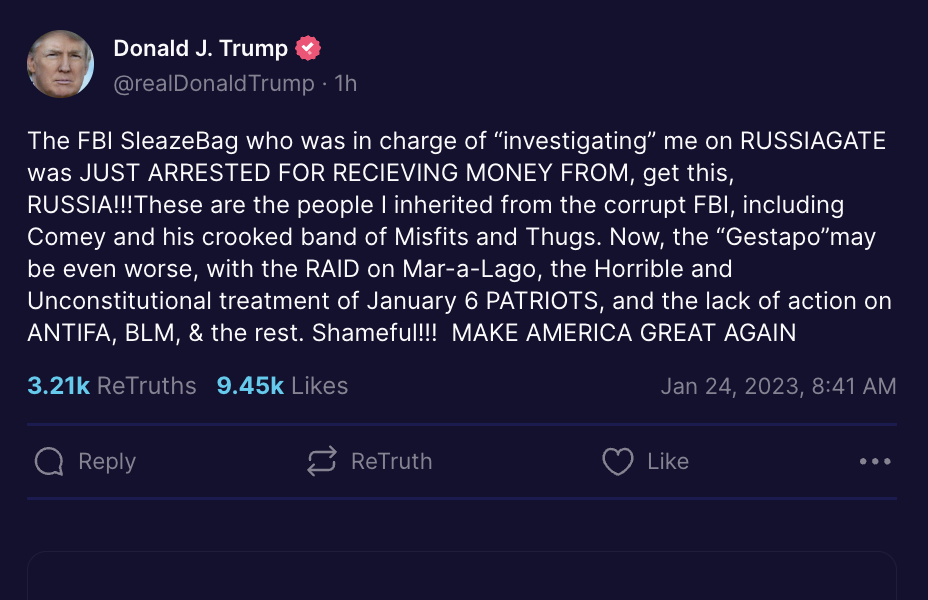 And last, but surely not least for the day, Trump posted about Mike Pence. It was reported Tuesday that Pence also had classified documents in his Indiana home, which is a pretty big deal. Obviously it’s nothing compared to what Trump did, and was probably more accidental like with what happened with President Biden.

Trump only wrote a short post for Pence though, and said, “Mike Pence is an innocent man. He never did anything knowingly dishonest in his life. Leave him alone!!!”

Such a short post! Of course Trump did suggest that Pence should be hanged on January 6th for not breaking the law and keeping Trump president, so maybe that’s all Trump could muster.