Melania Trump isn’t exactly the most public First Lady we’ve seen in recent administrations, and we know almost no details about her life other than that she was a model and then married Donald Trump. To many Americans, she seems like the loneliest person in the White House right now, but she does have one person she can always count on—her sister, Ines Knauss.

Knauss is a few years older than Melania and lived near the Trumps on Park Avenue. She’s an artist and fashion designer.

Last year, the New York Post referred to Knauss as “the older sister nobody knows” and Town & Country called her the “secret sister.”

But for a member of the Trump family, the first lady chooses to be a lot more private online than, say, Donald Trump himself or his children. Despite her relative secrecy, Melania Trump still mentioned her sister in her speech at the Republican National Convention in 2016. The now-first lady said Knauss was “an incredible woman and a friend.”

According to the Express, Ines Knauss obtained her citizenship last year, around the same time Melania’s parents obtained their citizenship.

Of course there are many questions about how Melania received her visa when she originally moved to the US, as the first lady obtained the “Einstein” visa for “extraordinary ability.”

While we can’t expect everyone in Donald Trump’s orbit to be an enthusiastic Twitter user, it’s hard to stress just how little is known for sure about Knauss. In fact, the same half dozen or so facts about her are written into almost relevant every article.

Ines does have an open Instagram account, but it appears she only posts photos of Melania and Barron from gossip magazines.

First, the New York Post confirmed via property records in 2017 that Knauss lived in a Trump Organization-owned Penthouse near Melania Trump. Town & Country reported that it’s the same building on the Upper East Side of Manhattan that daughter and special adviser Ivanka Trump and Jared Kushner lived in prior to their move to Washington, D.C. It’s unclear if Knauss still lives there now that Melania Trump has moved to Washington, D.C.

Next, she frequently shares vintage (the ’90s are now retro!) photos of Melania Trump on Facebook. After the New York Post published a get-to-know-her report on the first lady’s sister, she appeared to remove a few public posts, but some are still visible. Knauss’ Twitter account also seems to be private.

What is really impressive is that for all the professional photos of Melania Trump in photo services like Getty or the Associated Press, there seems to only be one of Knauss from 2005, seen here in Town & Country. In it, she’s pictured with her sister as well as Palm Beach philanthropist Audrey Gruss. “They are very close,” Gruss told the New York Post when they met at a fundraising event at Mar-a-Lago resort. “She struck me as a lovely person, and extremely creative.” 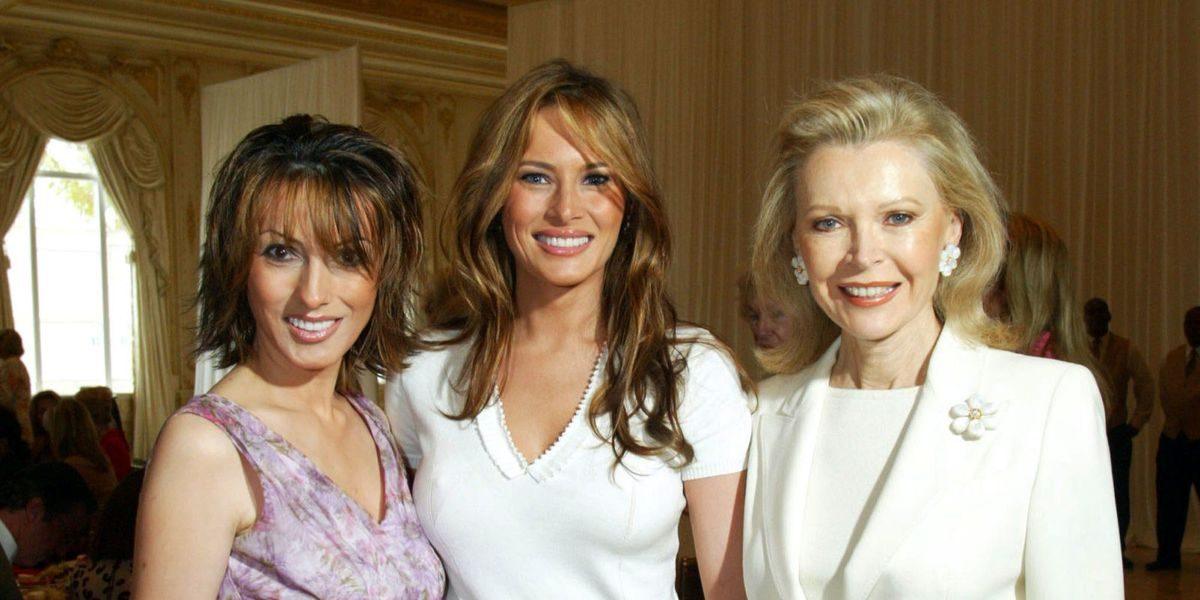 Speaking of Mar-a-Lago, CNN reports that Knauss served as Melania Trump’s maid of honor when she wed Donald Trump at the resort in 2005.

As Town & Country reported, the sisters were born with the last name Knavs and grew up together in Slovenia. They moved to Milan, Italy together in the early 1990s, where Ines wanted to break into fashion design while Melania was beginning to model – the career path that would lead her to meet her future husband.

“She really wanted to be in fashion but didn’t know how to break in,” Paris-based photographer Ale de Basseville told the New York Post. “Ines wasn’t like the other girls you would meet there, who behave like queens. She was really polite and very mellow.”

It’s reported that Ines Knauss is now an artist. Melania Trump has previously shared her sister’s pencil-based sketches on Twitter.

It’s a rare accomplishment to be in the Trump orbit and have so little publicity surrounding you, but Knauss has managed to retain a relatively large amount of privacy.