UPDATE: Snopes did their due diligence and determined the “wet mark” on Trump’s pants was actually a shadow. They were able to obtain other angles that show Trump didn’t indeed wet his pants.

Donald Trump made a brief pitstop on his way to Mar-a-Lago on Friday, visiting Tennessee where residents are still sorting through wreckage and seeking to rebuild after a series of deadly tornadoes blew through the state earlier this week. The president landed in Nashville and from there departed by helicopter for Cookeville, in Putnam County, where 18 residents died and dozens more were injured in the destruction Tuesday.

All told across the state, authorities say at least 24 people died in the storms.

“I have a message for the families of those that lost their lives: We love them. They’re special people. It’s an incredible place — incredible state, tremendous heart,” Trump told a news conference Friday in Cookeville, in front of the wreckage of a home. “Already you see people rebuilding.”

Trump also showed off his evil side when he bizarrely told the story of a young boy orphaned by the storms.

“And how did his parents do?” Trump asked the officials standing beside him.

“They were found deceased,” came the reply. “He was the only surviving member of the household. Lost his sibling as well.”

Trump, surveying tornado damage in Tennessee, talks about a young child who was found walking in the street.

Trump: “How did his family do?”

Trump: “So his parents were killed. And his sister. So we’re going to go see some of the folks.” pic.twitter.com/zttQQiwPIO

But that wasn’t the story the day.

We’re grateful for the prayers and support of our neighbors after a very hard week for Middle Tennessee. Thank you, @realDonaldTrump for making the trip to survey storm damage in our state.

This photo in particular raised some eyebrows. 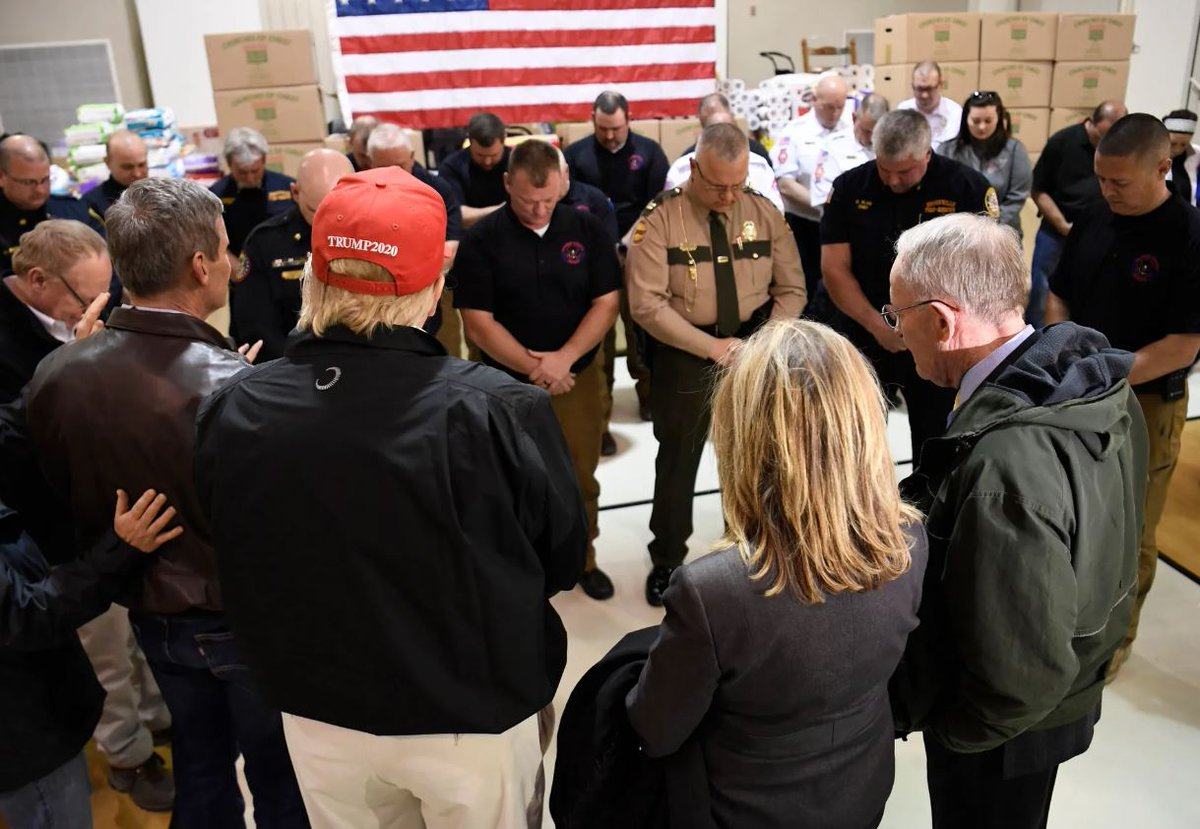 If you look closely, it appears Trump has a wet bottom.

Now, some have suggested it’s a shadow, but I don’t see it? Like, the light is above. No one else has a similar shadow? Perhaps Trump was sweating, or his diaper leaked, or he had swamp ass. I honestly don’t know.

What I do know is this.

If Joe Biden appeared in public with a wet bottom, every single right-wing publication would be all over it. And yet we are the only one thus far to write about Trump’s wet bottom. Trump and his supporters are trying to make people believe that Joe Biden has dementia. When Biden appeared at a town hall event he had a bloody eye and it was covered by EVERYONE, including Fox News.

When Hillary Clinton got weak knees on a hot day while she had pneumonia, it was front page news.

Now we see Trump with a soaked ass and we’re not supposed to ask questions? Seriously?

There has long been a rumor that Trump wears diapers. Former Celebrity Apprentice staffer Noel Casler has been sounding the alarm about Trump’s health for well over a year now.

Anyone who thinks I am joking about Trump wearing Depends on ‘Apprentice’ set I am not. This pic is from today in Nashville. You can clearly see his ‘diaper-toe’ showing. @realDonaldTrump pic.twitter.com/2vBWXnMWig

Casler even commented about the photos of Trump’s wet bottom that went viral yesterday:

Y’all are lucky it was only pee in Trump’s Depends yesterday, we would pray for ‘just pee’ on the ‘Apprentice’ but he usually gave us something else. Crew nicknamed it ‘the sh*t show’ for a reason. Even his kids would laugh at him.@realDonaldTrump

And before you know it, #DiaperDon was trending on Twitter, and quite honestly, it was hysterical:

I can’t unsee this, but it appears @realDonaldTrump diaper leaked while he was at Tennessee yesterday. This needs to trend big time #DiaperDon #coronavirus #Tennessee #pissydonald. pic.twitter.com/2WO0x2faqC

Many people are saying that Donald Trump appears to be wearing a diaper during his visit to the CDC yesterday – but I think that’s just a bunch a crap 😉#DiaperDon pic.twitter.com/e6T0Bvr08s

What do Donald Trump and the Coronavirus have in common?

I refuse to make fun of Donald Trump for being an old dementia case who sprays his urine wherever he happens to be standing with glorious abandon. I WILL make fun of him because it would absolutely be in character for him to be too lazy to go to the bathroom #DiaperDon https://t.co/V6Ktabjks4

There was a time I would have thought myself above participating in a hashtag like this, but that was before the rudest excuse for a human being came down the escalator in Trump Tower in 2015 and started destroying the world, so now I'm fine with contributing to #DiaperDon https://t.co/UQrRU5Klj6

I prefer Presidents who don't walk around in public with a wet diaper. #DiaperDon pic.twitter.com/PJYl5DrTmB

I saw #DiaperDon trending and thought it was just a nickname because he is a whiny little baby…. Nope, it was because he literally pissed his pants. 😂🤣😂🤣😂🤣 I will not post the picture because it's not something you WANT to see, but it's out there so you can search it..