Punctuation is everything, my man.

We’ve seen our share of attempts at political statements on people’s cars. We’re not just talking bumper stickers, either.

Some people are so committed that a little vinyl just won’t do. They go all-out writing with glass markers or sometimes even spray-painting their messages down the sides of their vehicle.

Almost invariably, these cars belong to seriously dumb Trump supporters. We’re not just assuming because of the misspellings. The messages are almost without fail some right-wing nonsense.

Lately, we’ve seen anti-mask and anti-vaccine messages, messages about Trump actually being the winner of the 2020 election, and scores of awful messages of every kind.

That doesn’t even begin to cover the conspiracy theory messages about “benereal diseases” created by the “nano chips” we all apparently have implanted in our bodies. 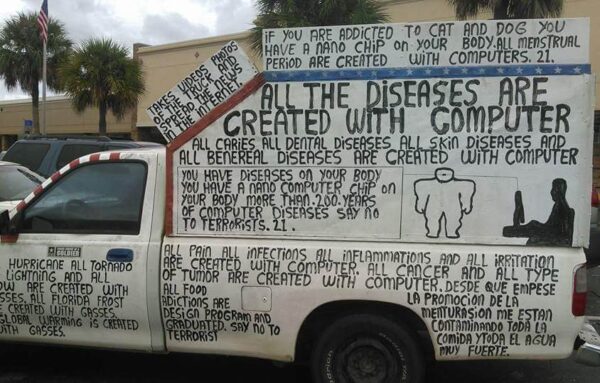 I have to confess, I had no idea that “all type of tumor are created with computer,” and I thank this brave soul for waking up the masses to this devastating fact. Hopefully we can create some software, maybe a new antivirus suite, that could help prevent this sort of thing.

But it really is the Trump-supporting ones that are always the dumbest, and today’s hero is a flag-waving, Silverado-driving patriot from the all-American state of Nebraska.

An effort was made. pic.twitter.com/8WGOJUVqfp

I’m not sure Cletus here really thought this one through, you guys. Which one does he support? It reminds me of the lady-yelling-at-a-cat meme: 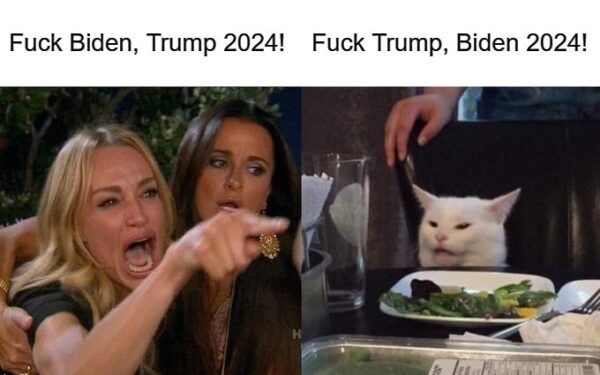 Who wants to tell this guy that nobody knows who he’s rooting for? Although I suggest you be careful, cause you never quite know what’s hiding behind that back window. Maybe a nice little chat would help.

Maybe then he can clear up exactly who he’s talking about, although we’re pretty sure we already know.

Punctuation is a hell of a thing

"Trump must be more popular than I thought. All these people driving fuel efficient vehicles are honking and giving me a thumbs up!" https://t.co/OtR1qLWjww

Don’t these people have jobs? You can’t show up for work in a car like that lol.

We really need to invest more in our schools https://t.co/PQpKP7szT6

"A pickup divided against itself cannot drive."

I guess basic sentence structure wasn't a priority at his school growing up. Ugh, education is important. Thank a teacher you know who cares. https://t.co/3TtIFAA6Ak

In my mind, the owner of this truck just doesn't want another Trump/Biden election. https://t.co/Xiss0Glnz1

I don't think this means what he thinks it means https://t.co/OK6wfzNr9z