Hey, did you know that if you don’t have kids, you are unable to teach? Well, you aren’t if you answered yes to that question. That’s according to Sen. Tom Cotton (R-Ark.).

It’s rather odd that Cotton is even going on about this, since, as National Zero points out, he’s never taught in a classroom, nor has he ever studied education practices. But he’s dissing Randi Weingarten, an out lesbian who’s taught at a public school in Brooklyn, New York. And also obtained a law degree and climbed the ranks to become president of the American Federation of Teachers.

In other words, she knows a thing or two. She is certainly more of an authority on teaching than Cotton is. But it’s safe to assume Cotton is trying to gin up support from former President Donald Trump, just like Virginia Governor Terry McAuliffe’s Republican rival Glenn Youngkin did.

This is what he had to say to Fox News’s Bill Hemmer:

“I mean isn’t it amazing that Terry McAuliffe ends his entire campaign with the head of the teacher’s unions? Randi Weingarten is a joke. Randi Weingarten does not even have children of her own. What in the hell does she know about raising and teaching kids? In fact, that’s probably why she was perfectly fine to shut down schools for two years and force kids to wear masks because she didn’t have to deal with it at home. and in fact, Loudon county, where they finished their campaign, the exact county that covered up two r*pes, is also now, closing schools this week. That’s what Democrats across the state of Virginia are going to do if Terry McAuliffe gets reelected. They’re going to shut down your schools again.”

But Cotton, who not all that long ago said he rejected the idea that the U.S. was systematically racist to its core and caused a stir that offended a lot of people when he introduced the Saving The American History Act.

This legislation was an attempt to defund The 1619 Project, initiated by The New York Times that resets the historical view of slavery. Project founder Nikole Hannah Jones won a Pulitzer Prize for her commentary.

But Cotton had a bit of spleen-venting to do, describing The 1619 Project as “left-wing propaganda,” The Arkansas Democrat-Gazette reports.

“We have to study the history of slavery and its role and the impact on the development of our country because otherwise we can’t understand our country,” he said at the time.

“As the Founding Fathers said, it was the necessary evil upon which the union was built in a way, as [Abraham Lincoln] said, to put slavery on the course to its ultimate extinction.”

Cotton’s remarks angered Jones and lots of other people and she rebuffed Cotton’s remarks quite aptly and appropriately in a tweet. That tweet has since been deleted, but it read: 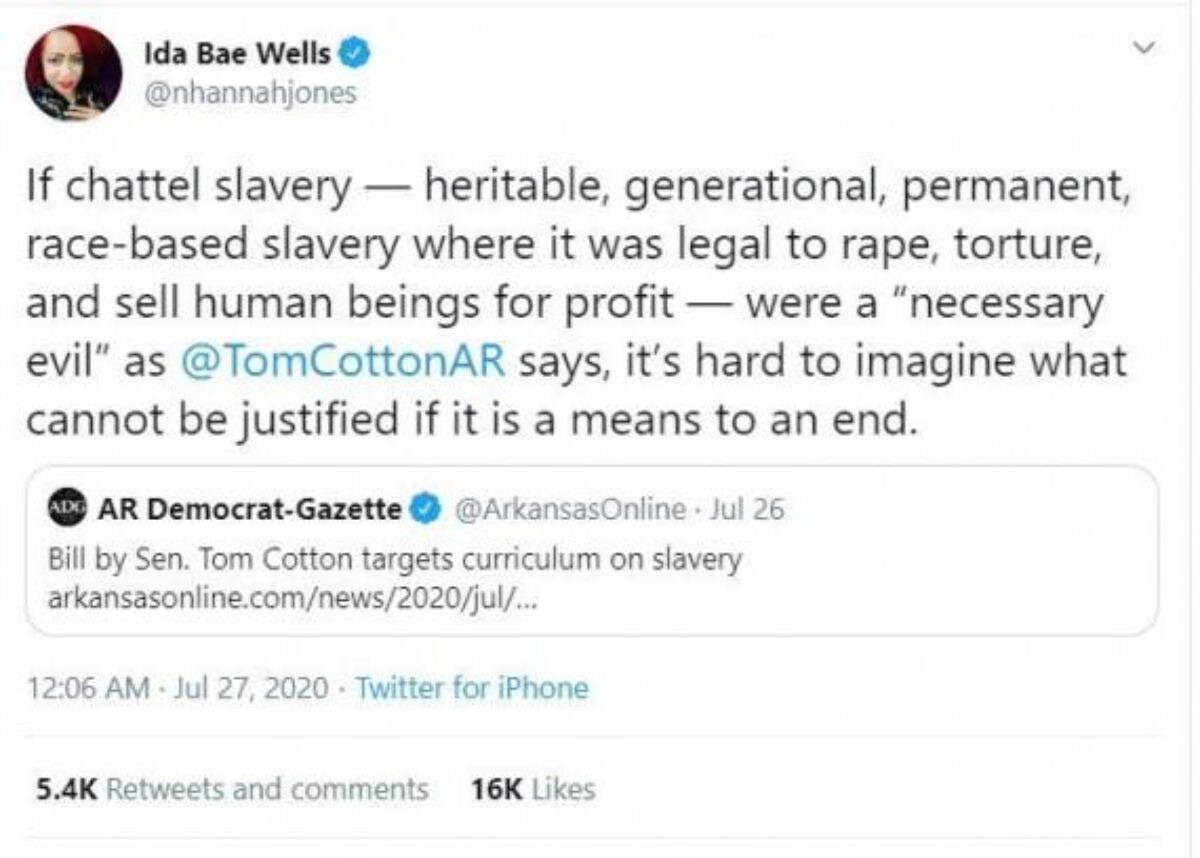 So why am I citing all this? Because Cotton and his ilk are opposed to allowing the true history of how this country was founded. Because it truly was founded on the backs of innocent people from Africa, from China, and nourished by the bl00d of Native Americans. These facts should never be forgotten and it’s tragic that so many conservatives try to block the teaching of this real and true history in our schools. I’m just illustrating what kind of person Cotton really is. He’s a tool, and I don’t mean the kinds that are useful.

Here’s Hemmer’s interview with Cotton below.