Bitter Trump Mocks Biden for His Seat During Queen’s Funeral, Says If He Was President He’d Be at the Front

Well, this should come as no surprise. We all know Donald Trump is FURIOUS he wasn’t invited to Queen Elizabeth’s funeral, and Biden was, so he had to get petty and make a mean and bitter remark.

Trump wrote on Truth Social, “This is what’s happened to America in just two short years. No respect! However, a good time for our President to get to know the leaders of certain Third World countries. If I were president, they wouldn’t have sat me back there—and our Country would be much different than it is right now!”

He also attached a photo: 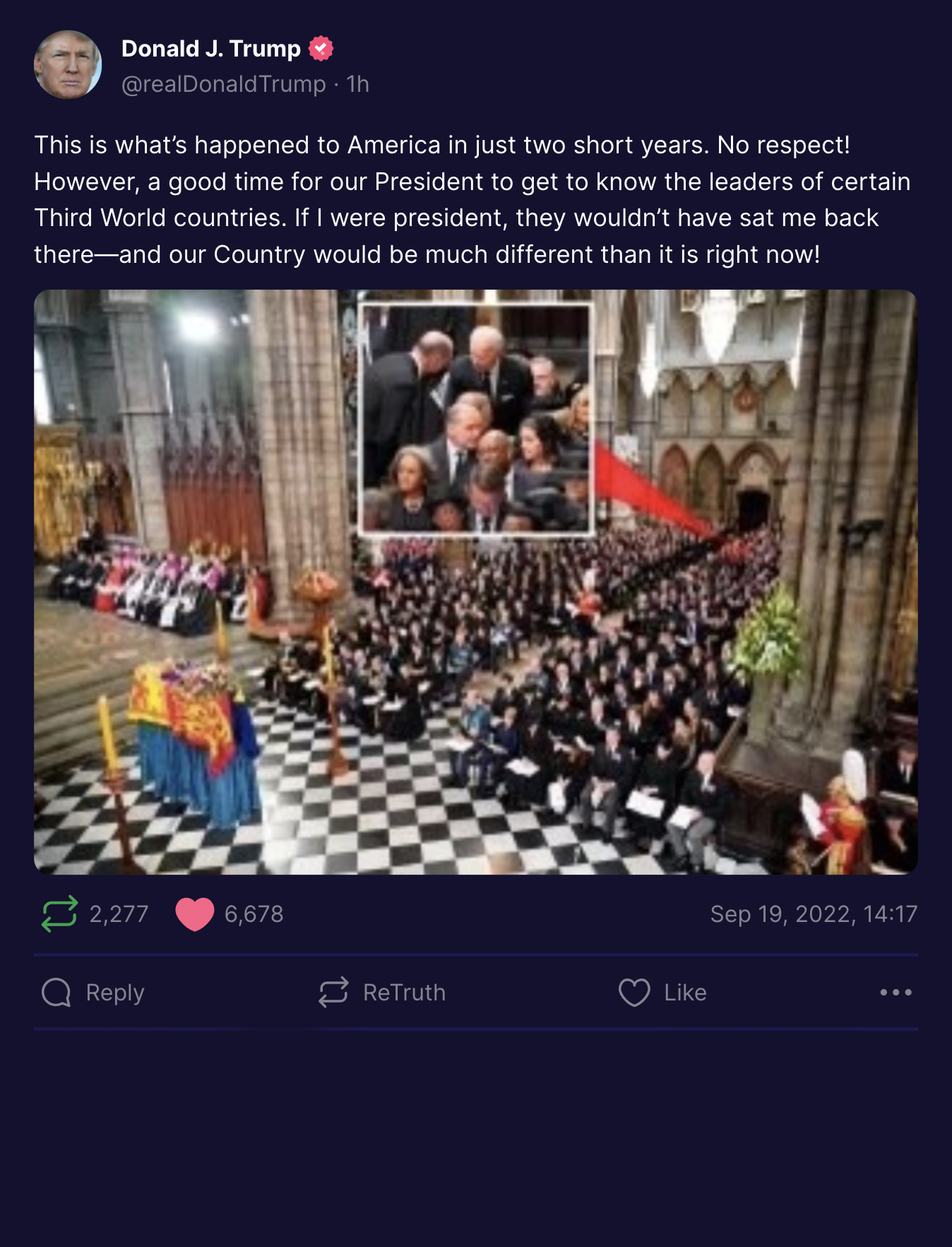 The Bidens arrived at the state funeral via the presidential limo The Beast in a private motorcade while other world leaders rode together in buses. American security protocols for the president are strict and require him to travel in the armored car with security vehicles surrounding him.

During the hour-long memorial service, the president sat directly behind Andrzej Duda, the Polish leader, and directly in front of Petr Fiala, the prime minister of the Czech Republic.

Jill Biden sat next to Ignazio Cassis, the president of Switzerland.

The Bidens were seated in the south transept section of Westminster Abbey, in an area of the church reserved for world leaders. The south transept contains the poet corner were prominent British authors like Geoffrey Chaucer are buried.

According to the Daily Mail, the Bidens were seated in the 14th row. Now, who knows why. Maybe because they were late due to security issues. Maybe because seats were assigned and members of the Royal Family and British leaders were given the front seats, which would make sense.

Still, it’s just so pathetic how petty Trump must be. He even followed it up with another post:

“In Real Estate, like in Politics and in Life, LOCATION IS EVERYTHING!!!”

From the Daily Mail:

The first couple left for Washington D.C. after the memorial service while Commonwealth leaders like Justin Trudeau of Canada and members of European royalty, like King Felipe IV of Spain, went to Windsor for the burial service, which took place two hours after the memorial ceremony at Westminster.

Funeral seating has a strict protocol for the heads of state, prime ministers and presidents, members of European royal families and other guests among the 2,000 mourners gathered at the abbey.

Guests were seated to the left, right and in front of the platform that held the Queen’s casket. King Charles and members of the royal family made up the first few rows.

So petty. So sad. This is Trump’s life now. Still unwilling to show a shred of class.